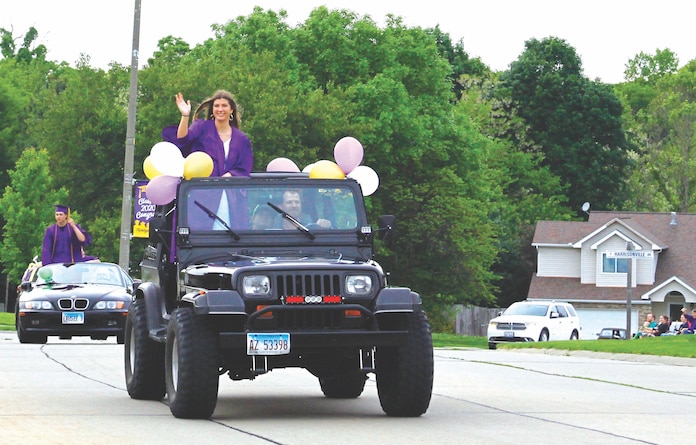 Twenty-six years after the Valmeyer High School Class of 1994 held its graduation ceremony in front of a vacant, flood-ravaged high school, the Class of 2020 had its own unique celebration.

On Friday night, Valmeyer police and fire department vehicles escorted VHS seniors through the village streets for a graduation parade. Most of the class members were on hand for one of their last hurrahs as VHS students.

Students dressed in purple graduation gowns rode in decorated vehicles as they took a lap around town, covering nearly every street. Some students even threw candy during the parade route.

Large banners sporting the school colors of purple and gold and bearing each graduate’s name were displayed on streetlight posts along South Cedar Bluff Drive in front of the school building.

Parents of students and other members of the community made their way to the sidewalks and driveways in support of the Class of 2020 as in-person graduation ceremonies were put on hold due to the coronavirus pandemic.

Valmeyer teacher Kelly Rowold helped organize Friday’s event. She was contacted by a parent who asked about the possibility of a parade. She then worked with police and fire departments and Valmeyer Village Hall to organize a route and schedule.

“I knew with the governor’s restrictions on schools, it could not be school sponsored, but school supported. The parents rallied and created a ‘senior parent’ social media page and we contacted all parents and students through those means,” Rowold said, emphasizing that they made sure to let students know that participation was not mandatory.

“All of us teachers thought it was a fun way to honor them in these times,” Rowold said, adding that most VHS teachers were in Valmeyer on Friday night to show their support.

VHS Class of 2020 valedictorian Alexis Mueller said the community was “extremely nice and supportive” during the parade.

“Obviously things didn’t go as planned, but I feel we were lucky to be celebrated in a way that was also safe.”

VHS senior John Fausz said the parade was a “nice gesture,” but that he is also looking forward to having a traditional ceremony. He predicted the parade would “not feel the same as graduation will feel in July.”

According to the Valmeyer school website, an official ceremony is tentatively scheduled for July 31.

On Tuesday night, seniors were recorded walking across the VHS stage in the gym as part of a graduation video project. Students were not in the gym at the same time and were scheduled in five-minute increments.

Mueller described her graduating class as “adaptable” and that she was “proud to be a part of it,” noting that “when trouble strikes, the community of Valmeyer always comes together.”

Fausz also offered some perspective for the Class of 2020, saying “this is not the only time that we have faced hardships as a community. A good amount of the Class of 1994 lost their homes due to the Flood of ‘93. During the Vietnam War, the senior men were being drafted to fight overseas, and some did not even make it back home. This is not the worst that we have faced in the community, as well as the country. We will get through this just like we get through everything else.”