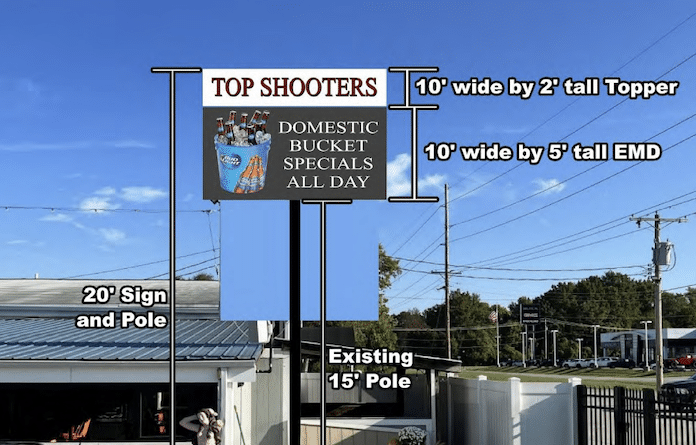 Two actions were taken regarding business signage during Monday’s meeting of the Columbia City Council.

One vote put a moratorium on any new sign permits until the end of March.

The motion was made as a result of a memorandum by Columbia City Administrator Doug Brimm suggesting the action, citing “concerns raised by the public on signs recently installed within the City of Columbia, and due to inherent conflicts within … the Columbia Municipal Code.”

During discussion, Brimm said he and Columbia Director of Community of Development Scott Dunakey had been in discussion about the sign code. He recommended putting a moratorium on new signs until city staff could draft a new ordinance that provides better clarity for sign regulations within the city.

Ward IV Alderman Steve Holtkamp suggested an amendment for the motion to expire at the end of March, in case the revised code was not ready for adoption in a timely manner and to avoid an indefinite moratorium.

The council approved a motion to prohibit new sign permits until new language is approved or March 31, whichever comes first.

The vote came shortly after the board approved a sign variance request for Top Shooters Sports Bar at 531 Old Route 3.

Several residents of nearby Skyline Drive had attended the Jan. 18 city council meeting to express opposition to the new sign.

One such resident, Donna Biondo, reiterated her concerns Monday during the public input portion of the meeting, stating the new sign will “cause injury to the value of property in the vicinity.”

She also added “the city has proven they can’t enforce vague (city code) guidelines” in her appeal to have the variance denied.

One part of the variance allows a new sign with an electronic message center to be installed in the same place as the existing sign. The EMC would cover over 70 percent of the total sign area, which exceeds the city regulation of only 40 percent EMC sign coverage.

The variance also allows the sign to be within the five-foot setback area.

During discussion at the Jan. 18 meeting, it was reported the Illinois Department of Transportation required a survey to ensure the sign does not overhang onto IDOTs right-of-way on Old Route 3.

Dunakey said a survey concluded the sign is .4 feet from the property line and does not rest in IDOT’s jurisdiction.

He also said the owner of Top Shooters addressed residents’ concerns about lighting on the property, noting “Ameren did make adjustments to Top Shooters’ light fixtures,” changing the direction of the lighting to shine inward and down onto the parking lot rather than “upward and outward.”

The variance was approved unanimously, although Ward II Alderman Mark Roessler did not vote as he was absent.

He gave the council an overview of what the department is responsible for as well as projects it has been working on in the past year.

He also previewed upcoming projects. One project is the Quarry Road roundabout and resurfacing work. He said the project will be let for bidding March 11.

The council approved three resolutions Monday pertaining to the Quarry Road project after Smith’s report. The resolutions establish one permanent easement and procure two warranty deeds for right-of-way required to begin the project.

The board also approved a resolution to be sent to state legislators expressing opposition by the City of Columbia to proposed changes to the Illinois Tax Increment Allocation Redevelopment Act.

One major change would reduce the maximum initial term for a tax increment finance district to 10 years.

Both Dunakey and Brimm stated the changes would be detrimental to smaller municipalities in the state, noting the success of the recent Admiral Parkway TIF district would not have been possible under the proposed rules.

It was also noted that while amendments to Illinois TIF rules have been introduced and rejected during every legislative cycle in recent years, it is important to officially oppose the changes as it is becoming more difficult to keep them from becoming law.

In other action, the council approved an agreement with Monroe County about the cost-sharing of software used for 911 services by both entities.

The council also approved a request by Charlie’s Carstar for “substitution of required exterior building materials” for a new facility at 1845 Ghent Road.

He also said he wanted to “recognize (that) the kids (at Columbia schools) today were super excited that they did no longer have to wear a mask to school.”

Hill was referring to a recent ruling that restricts schools from implementing mandatory masking requirements. He noted that others who choose to wear a mask at schools are still able to do so.

“This is America, and this is how democracy should work,” Hill concluded.