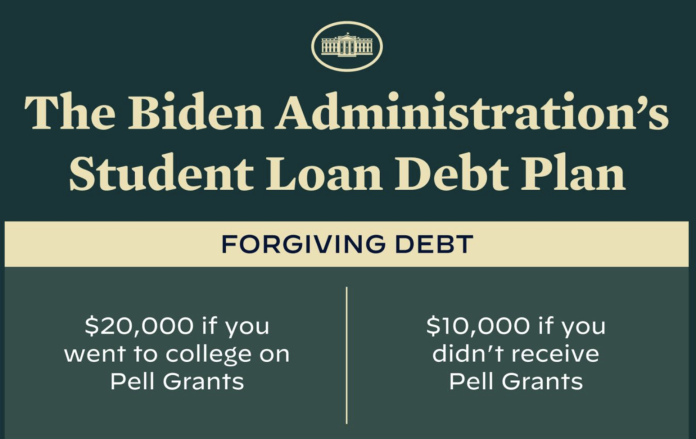 While some emphasize personal responsibility when it comes to taking care of student loans, others point to the sheer scale of student debt in the country as an impossibility for many to handle on their own.

Information from the U.S. Department of Education released in the weeks following the announcement has helped provide a greater understanding of how the debt relief plan would actually affect those who need it.

Relief is targeted at low- and middle-income families, with eligibility for loans being determined on income. Individuals with an income less than $125,000 and households with an income below $250,000 are eligible for relief.

Recipients of the Federal Pell Grant – typically awarded to low- or moderate-income undergraduate students – are eligible for up to $20,000 in federal loan forgiveness while non-Pell Grant recipients can receive up to $10,000 in relief.

Those looking to learn more about the relief plan can visit studentaid.gov.

Locally, debate continues on the efficacy and potential impact of the proposed relief plan.

McKendree University President Daniel Dobbins said McKendree has been able to keep its student debt lower than other private schools with loan amounts comparable to nearby public universities.

He remarked that Biden’s proposal is “certainly a double-edged sword and is far from perfect.”

Dobbins added that most McKendree students are able to repay their loans, though some struggle to meet debt obligations.

“Increasing Pell and other need-based aid for existing and future students and lowering the interest rate on those loans would allow more students to find ways to attend and complete college, providing them a path and options for long-term success,” Dobbins said. “These are areas not addressed by the Loan Forgiveness Executive Order.”

One graduate from McKendree and Washington University who asked to remain anonymous said the interest resulting from their $88,000 loan has caused problems for them.

Currently working as an occupational therapist, this local resident said they will likely pay around $160,000 dollars in the end – an inevitability given their career demands the masters degree they worked for.

“I have paid off the entire dollar amount in my loan but with the interest that accrues on the loans I still have $46,000 to pay off,” they wrote. “I have not missed a payment since I started paying, nor have I deferred my payments except for the federal deferment. It’s upsetting to see people who feel that we are not making our financial contributions or aren’t paying for the college we went to.”

Another local who asked to remain anonymous graduated from Saint Louis University and currently owes $87,000 in loans.

This resident said they went against their school’s advice and stopped filling out their FAFSA application later in their college career. They have been making income-based payments for several years, but said they will likely be paying on the loan for the rest of their life.

“When I signed up I was led to believe by the (school) counselors that I would make a much better wage once I had a degree to help with the payback,” they wrote. “I was young when I started and was misled that I should take out student loans, etc. I didn’t realize how quickly it would get out of hand, and I realized I would never be able to pay all this back.”

U.S. Representative Mike Bost (R-Murphysboro) also weighed in on the President Biden’s relief plan shortly after it was announced.

“I appreciate that many young people and their families are struggling with the burden of student loan debt. But there are many hardworking Americans who attended a trade school, work in the service industry, run a small business, or stayed home to raise a family who are struggling too,” Bost said in a statement. “It is unfair to make them shoulder the cost for those who decided to attend college. We must continue working to find solutions that make college more affordable and accessible, but President Biden’s plan is nothing more than a taxpayer giveaway to score political points.”

Applications for the relief plan are currently expected to be made available by early October, with applications accepted at studentaid.gov until Dec. 31, 2023.