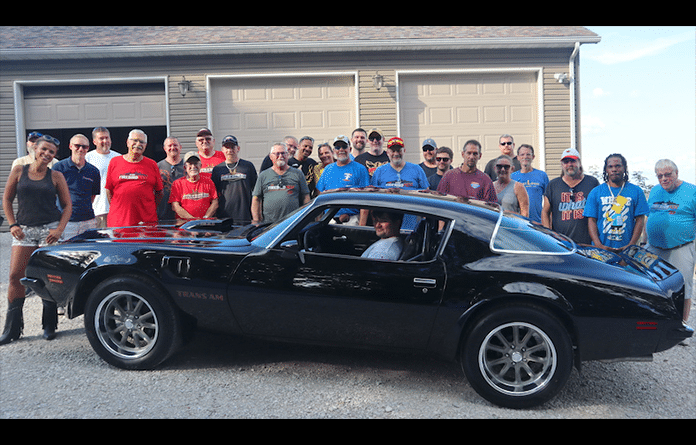 A trail of classic cars snaked through Waterloo Saturday afternoon as a group of Firebird enthusiasts went to reveal a restored car to a young man who had recently lost his father.

John Hood of Hecker suddenly passed away in January, leaving behind his wife Meadow, children – including 23-year-old Logan – and a car he had long planned to restore.

Meadow Hood recalled John’s passion for the vehicle. He originally purchased the car around a decade ago, shortly after the death of his own father.

In recent years, John had acquired a foreman position at his job and was often quite stressed. Meadow had suggested returning his attention to the car that had long been in storage as a way to occupy himself.

Meadow said that, following John’s passing, she wasn’t sure what would be done with the car. She turned to John’s fellow car enthusiast friend Will Fischer.

“I figured that’s probably the best chance the car had,” Meadow said. “It was with his friends, and I knew how much they cared for him, and I knew what they were capable of.”

Fischer recounted the time around John’s funeral services similarly, including how he offered to get the vehicle in better shape.

“She had mentioned she didn’t know what to do with John’s car,” Fischer said. “I told her there I was gonna go ahead and get it going for him, so that’s what I did.”

By Fischer’s account, the Firebird was in a sorry state earlier this year. With a cat taking residence inside and significant problems with the engine, it took several months to get the car in decent condition.

As Fischer has been dealing with back problems recently, much of the engineering and other work on the car was performed by a friend of his as well as Logan.

Sometime during the repairs, Fischer reached out to Rod Haffer, who organizes the I-55 Firebird Club. Fischer asked for some help to make the reveal a little more special, and Haffer was happy to get in touch with his fellow club members.

“He asked me if I could bring down a couple cars, and I said, ‘Yeah, I can bring down more than a couple,’” Haffer said. “Next thing we knew, we had 20 people.”

Repairs on the car were completed early Saturday afternoon at Fischer’s house, and a group of 20 cars drove from the Waterloo Walmart parking lot to Fischer’s home near KK Road just a few hours later.

Another vehicle left to retrieve Logan from Hecker, and although the new the car would be ready sometime, everyone played along to make it as big a surprise as possible.

For Fischer, the joy on Logan’s face upon seeing his father’s car was well worth the effort.

“Every time he had a smile, it was awesome,” Fischer said.

Meadow, who was waiting at their Hecker home when the parade of cars arrived, said she had a similar reaction.

“It was a lot to see,” Hood said. “Just seeing it come home, in our driveway, and our son’s driving it.”

The party that followed saw the Hoods and members of the Firebird club celebrating with pizza and drinks as they welcomed Logan into their ranks.

Haffer, who described the club as a tight-knit but informal group, said making Logan feel like part of the family was his and the other club members’ main goal.

“The whole purpose of going down there was to show that even though he experienced a tragic loss, we wanted him to know that he’s not alone,” Haffer said.

Following the celebration, Meadow said she and Logan spent some time together driving down their street, which proved to be quite impactful for her.

“That’s the first time I had been in the car for several years,” Meadow said. “It was just surreal because it’s the best it had ever drove, it was in wonderful shape, it was the best shape the car ever had been in. And just looking over and where John was supposed to be, Logan’s driving.”

Fischer said he was glad to be able to get the vehicle done in time before an upcoming surgery that would take him off his feet for several weeks. He emphasized how amazing it was to see Logan’s reaction to the Firebird.

Haffer expressed his hope that Logan feels welcome among the Firebird club members. He said Logan has a pass for their third Firebird Festival next May, where he anticipates over 250 cars from around the area and nearby states.

Meadow also said she was pleased with the Saturday reveal. According to her, Logan has already begun to take great interest in the Firebird.

She added she can’t see the car going to waste with Logan, and she hopes it will continue to be a part of his life.