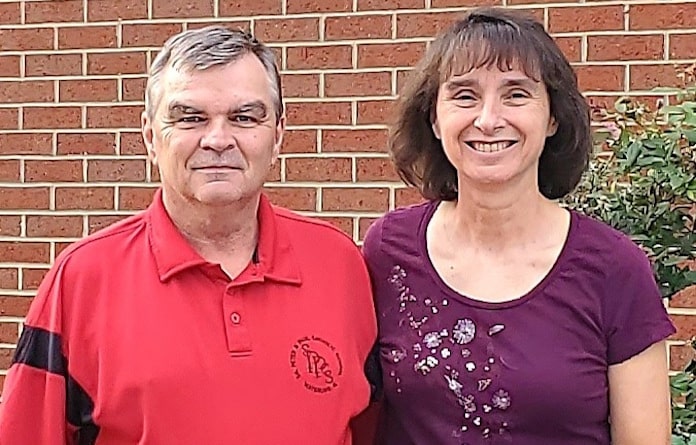 Gibault did not have a gym at the time, so Joan would take the volleyball team she coached to SPPCS to use its gym.

“That’s how we met,” Joan said of her husband. “We just kept running into each other.”

The Tepens have been mainstays of the Catholic teaching community in Monroe County for decades, but they both retired earlier this summer, taking their combined more than 80 years of experience with them.

A Gibault graduate, Joan did her student teaching at her alma mater. During that time, the jobs she wanted of English teacher, volleyball coach and softball coach became available, so she started working at the school in the fall of 1979.

“It’s exactly what I was looking for,” Joan said, noting that she played on multiple inaugural girls’ teams at Gibault and played sports in college at Saint Louis University. “I wanted to continue doing that and providing girls that opportunity and help them grow.”

It took Vernon a little longer to come to the school he would spend most of his career, as he taught for about 1.5 years in Alton before answering an ad for an English teacher position at SPPCS. He then taught for about six years at Columbia Middle School before returning to SPPCS.

“I liked the school and the area,” Vernon recalled. “I taught in Alton, and it was pretty rough conditions there. This seemed like a pretty nice place to be.”

Like Joan, Vernon was also hired to coach, though his sport was baseball. He moved to teaching junior high social studies his next year at the school, which became his focus along with teaching physical education for several years.

He also served as coach of various sports and the school’s athletic director for many years.

The couple each said they enjoyed the community that came with working at the Catholic schools for so many years.

“I always appreciated the family aspect,” Vernon said. “We became good friends with parents through coaching and teaching. We had a good network of friends and a lot of support from everybody.”

Joan said she also liked the extra opportunities available to students and teachers at Gibault and how flexible the school was with her schedule as a working mother.

“There was always a chance for me to do things that gave me satisfaction and made an impact on kids’ lives,” Joan said. “Anybody who works at a Catholic school knows your job doesn’t quit when the bell rings. You wear all kinds of hats when you’re teaching at a Catholic school.”

While both teachers said they liked that part of the job, they also agreed it could be difficult to “(find) time in the day.”

The staff and students made those long work days easier for the Tepens.

“We’ve both been lucky to work with outstanding people. A lot of them have become our friends,” Vernon said.

“The kids are great,” Joan added.

The couple said they will miss both those groups of people now they are retired, including not being able to see students grow and learn or celebrate Mass with them.

“When you’ve been around kids for 40-some years, they always keep you young, and I think I’m going to miss that,” Vernon summarized.

Although it is bittersweet, Vernon and Joan said it was the best thing for them to retire.

That decision was largely driven by wanting to help care for their twin grandchildren and not wanting to bring the coronavirus home to their grandchildren or daughter who lives with them and has health conditions making her more susceptible to the virus.

“We’re lucky we were in a place where we could retire,” Joan said, adding they did not plan to retire for two years.

In addition to spending more time with their family, the Tepens plan to travel more and work as substitute teachers when that is safer again. Joan also said she looks forward to playing more tennis, while Vernon aims to play more golf.

As their careers come to a close, both said they are grateful for their time in Monroe County’s Catholic community.

“I don’t think I would change anything – except maybe have taller basketball players,” Vernon quipped.

Joan said she has been thinking about Lou Gehrig’s quote about being “the luckiest man on the face of the earth” as her retirement has sunk in, remembering how she got to teach many family members and how many of those people took years to find their dream job.

“I’ve got to teach at a place I love and work with some amazing teachers and amazing kids,” she said.  “I’ve been lucky to spend my whole career there.”