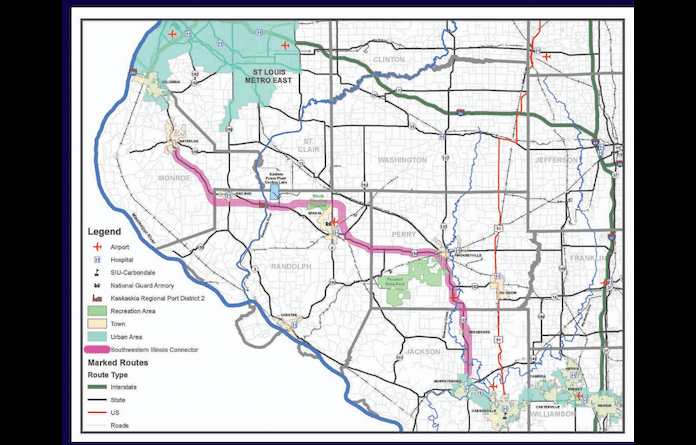 After being talked about for decades, the massive Southwest Illinois Connector project is getting closer to starting construction, as it recently secured new funding and the Illinois Department of Transportation awarded a $5.73 million contract.

Marc Kiehna, chairman of the Four-County Highway Coalition and the Randolph County Board of Commissioners, estimates the project will cost $80 million to complete. Most of the work includes expanding existing two-lane roads to four-lane  highways as well as making additional safety improvements.

One portion of the connector will include a new road in front of the World Shooting Complex in Sparta that crosses Route 4 and heads south to hit Route 154.

Recently, IDOT awarded Samron Midwest Contracting of Murphysboro a $5.73 million contract to begin adding approximately 1.3 miles to the current four-lane section of Route 13/127 north of Murphysboro. The construction will bring many improvements, including those concerning intersections and drainage, and will span from Ava Road to the area north of Grange Hall Road.

Kiehna said he expects this construction to begin in the “near future,” but he is not able to give a more definitive time table.

Although 1.3 miles is small compared to the entire scope of the connector project, Kiehna said it is a good start.

“Certainly anytime you’re pouring concrete, that’s a positive (as) there’s some movement going on,” Kiehna said. “Even though it’s 1.3 miles, it’s an affirmation that IDOT believes that this is a project that needs to be done, and so when I heard the news I felt very good about it, and I’m also hopeful that we will receive some federal infrastructure money so we can start construction and go even farther up to Vergennes.”

With talk of a federal infrastructure bill soon to be in the works, the commission also applied for an earmark with Sen. Tammy Duckworth for $52 million for construction relating to the portion connecting Murphysboro to Pinckneyville.

However, the coalition might not be able to meet this exact goal.

“We have been in negotiations with Sen. Duckworth’s office and the last word I heard was they were working to get our project in the federal infrastructure budget, and that it may not be all the way up to the Pinckneyville area, but it may be up to the Vergennes area,” Kiehna said.

Because they have already completed an environmental study for the area stated in their request and acquired the corresponding property, any money awarded to this part of the project would go to IDOT to award the bid to a construction company, Kiehna said.

Last year, the commission secured an earmark in the state budget for $15 million to conduct necessary environmental planning work for the first section of the connector, which will bridge Waterloo to Red Bud and Route 154 east of Sparta. Kiehna said he expects to receive the money in fiscal year 2023 and hopes to start the project soon.

The connector and its various benefits – which include easier access to hospitals, safety and those related to business – has been talked about for a long time before the Southwest Illinois Connector Task Force was even formed in 2018, according to Kiehna, and so he said the coalition is very excited to know the project is gaining momentum.

“Putting a four-lane in the metro area connecting to the south has been talked about since the late ‘60s. We’re talking probably about 50-60 years that people have realized that we need the ability to move back and forth to the St. Louis area from down south.”