Monroe County made it through the storms relatively unscathed. There was quarter-sized hail reported in the Fults area and several severe thunderstorm warnings issued, but the anticipated damage from high winds and hail was minimal.

A lightning strike may be to blame for a fire inside a home on Brand Woods Drive southeast of Waterloo shortly before 4 a.m. Wednesday that was extinguished by the homeowner. AT&T cell phone towers were also affected throughout the county, resulting in spotty cellular phone service for many.

A confirmed tornado touched down in Perryville, Mo., killing at least one. A possible tornado also struck the tiny village of Rockwood off Route 3 in far southern Randolph County, and portions of Randolph County remained without power on Wednesday.

The first weather event entered southwestern and central Missouri late Tuesday afternoon and raced to the northeast and into southwestern Illinois at 50 to 60 miles per hour, moving along and south of I-44 in Missouri and I-70 in Illinois. It carried with it large hail, damaging winds and tornadoes, including strong, long track tornadoes.

The second wave took place early Wednesday morning ahead of a cold front entering the area.

“Everyone is under the risk of severe weather this afternoon,” according to a NWS meteorologist speaking on a Tuesday conference call with local emergency management agency and media representatives.

During high winds, severe thunderstorms and tornadoes, the best course of action is to go inside a sturdy building and move to an interior room or basement. Residents of mobile homes should move to sturdier buildings before the severe weather arrives. Drivers should move their vehicles to areas less likely to be affected by falling trees or power lines and to shelter in their vehicles by crouching down and covering their heads, or exiting their vehicles to take cover in a low-lying area like a ravine or ditch. At schools or workplaces, take shelter away from windows and avoid large, open rooms like cafeterias and gymnasiums. 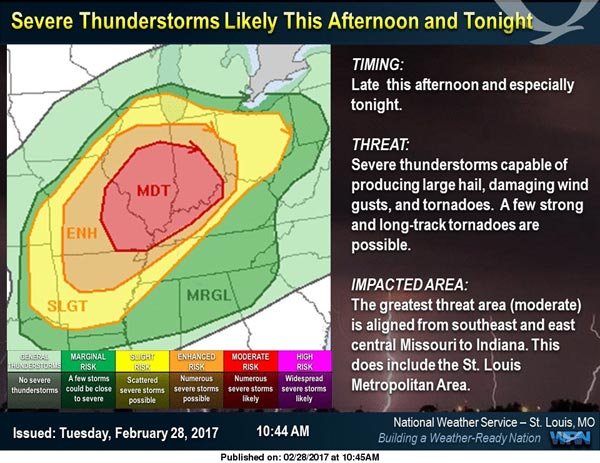