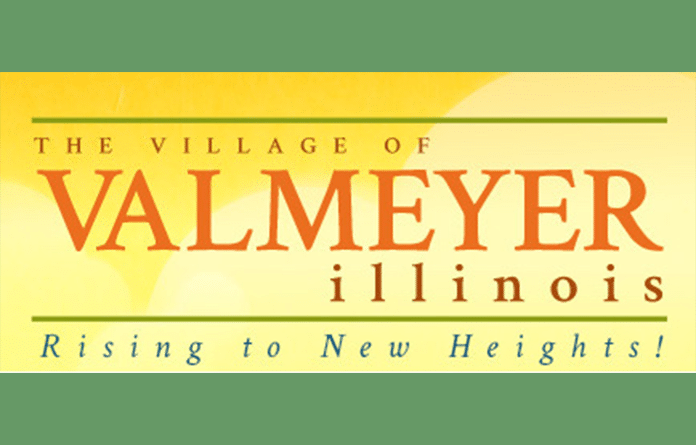 The first to be recognized was Valmeyer Police Chief Marty Seitz.

Seitz was commended for his continued service to the community as well as his response to a May incident during which a young boy was able to fully recover after nearly drowning.

Valmeyer Mayor Howard Heavner explained the village was “faced with a dilemma” in July during official village recognition for the others who helped save the boy’s life.

Seitz was the first emergency responder on scene during the May incident, but he was also the organizer of the July recognition ceremony and had presented  certificates and plaques during the meeting.

“It’s mighty hard to give your own self an award,” Heavner continued, adding Seitz needed to be recognized “for the many different things he has done … and prevented from happening.”

Seitz accepted the honor and addressed those in attendance.

“It is truly my honor to serve the Village of Valmeyer,” he began. “I am blessed to work where I work and live where I live. We truly do have a wonderful place here. I always joke it’s a little piece of heaven.”

The next to be recognized was Valmeyer Village Manager Dennis Valentine, who will retire from nearly 30 years of public service at the end of the month.

Valentine was a village trustee from 1995 to 2006, and has since served as village manager.

Heavner thanked Valentine for his consistent work in keeping the village informed about various issues.

“There never seemed to be a question I asked him where he didn’t find that information for me,” Heavner said, adding Valentine always worked to “keep us out of trouble. I will forever be in his debt for that.”

“When I think of Denny, I think of foundations. I think of  backbone. Something he always made a point of working on is infrastructure,” Heavner began. “You don’t even necessarily see what’s going on, but I guarantee 10-20 years from now somebody definitely ought to appreciate the work that he put in to get the job done. I know he doesn’t want to be recognized, but he has definitely earned it,” Heavner concluded.

“Unlike Marty (Seitz), I have very little to say,” Valentine joked, “but I thank y’all very much.”

Valmeyer Village Administrator Dennis Knobloch said Valentine is “definitely going to be missed,” saying Valmeyer has benefited from Valentine’s “experience as trustee and manager” and his “expertise and devotion to the village.”

After the recognitions, the board acted on a request to extend the village tap-in fees for new development in the Bluff Meadows residential addition.

The village tap-in ordinance is set to expire in September 2023, but Knobloch explained there is a potential buyer for the property in questions and extending the tap-in fees would help “consummate the sale if the board approves the extension.”

While the requested extension was for one year, trustee Kyle Duffy moved to extend the tap-in fees for three years in keeping with past village practices.