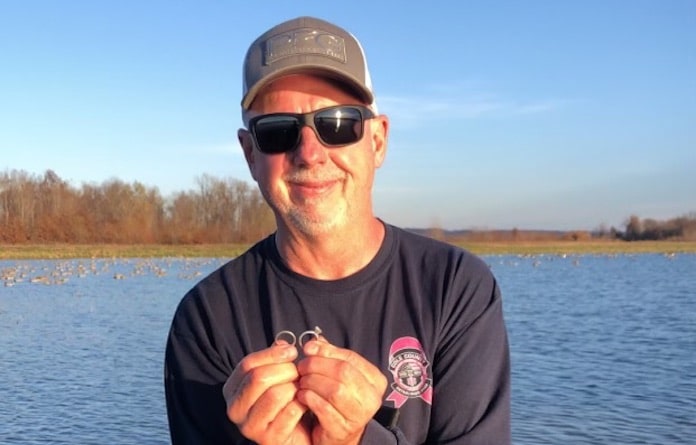 Barry Rolland of Waterloo is just a man with a hobby, but it’s one that’s helped reunite many folks with precious treasures.

Rolland is a member of Ring Finders, a directory of metal detecting enthusiasts specializing in helping people find their lost jewelry.

The Ring Finders’ online directory was started 13 years ago by Chris Turner of Vancouver, a metal detecting hobbyist who, according to the Ring Finders site, has been helping people find their missing rings for nearly three decades.

Ring Finders reports they have recorded over 10,000 recoveries, with the site also hosting a wealth of blog posts describing successful findings.

Originally from the central Illinois area, Rolland said he’s been interested in metal detecting for a long time.

When he came across the Ring Finders several years ago, he resonated with Turner’s goal to have a worldwide directory for metal detecting services.

“I kind of always had an interest in metal detecting,” Rolland said. “I messed around with it, y’know, probably 20-25 years ago just a little bit. Got a serious interest in it about 10 years ago, and six or seven years ago I stumbled upon the Ring Finders and just kinda thought to myself ‘Seems like it’s a service that should be available in the St. Louis area.’”

Since then, Rolland has been called out to a number of jobs. While some times are busier than others, he typically gets a call every week or every few weeks.

Rolland noted the convenience of the Ring Finders idea, as people can simply go to Google and search “find ring” only to come across his name.

For his services, Rolland requests payment based on what the caller can afford and how much the item in question is worth to them – though he also has a call out fee of about $25 to cover gas depending on where he’s searching.

He works primarily in the St. Louis area and nearby in Missouri, though he said he’s gone as far north as Jacksonville for a job.

Rolland described his abilities as someone who’s been metal detecting for many years.

A very important part of this hobby is equipment consisting of what he described as a typical but fairly expensive metal detector and a Garrett Pro-Pointer – commonly known as a “Garret carrot” due to its color and shape – for greater precision.

He said many people who lose precious jewelry will go out and buy a metal detector in an attempt to find it themselves, but trying to metal detect as a total novice can often just result in frustration.

“If you’re not familiar with the use of a metal detector and aren’t quite sure how to differentiate between the certain tones … or you don’t know how to discriminate some of the minerals that are in the soil already out of the system, you’re just gonna drive yourself nuts,” Rolland said.

The equipment and metal detecting skills alone don’t get the job done, however, as Rolland noted his people skills also play a major role.

Rolland has been a paramedic for 38 years and still works as one in St. Louis. He said the ability to connect with people through his full-time job has helped him greatly in this part-time work.

“We have to have the ability to gather somebody’s trust rather quickly when we come to their residence, inside their house or wherever we’re helping them,” Rolland said. “And I kind of take that out, run with it, and I’ve never known a stranger. It just makes it easier for me.”

Rolland said he has accrued a number of unique stories during his time working with Ring Finders.

He has a policy to not search without being accompanied by the person he’s working for – largely so he avoids accusations of claiming the recovery for himself – but this policy also sees him spending plenty of time with people.

He recalled one job where he found himself wading through about two feet of water in a wet marsh near Nebo.

He also described a recovery from earlier this year in which he found a lost wedding ring relatively quickly only to require the help of a local fire department as he was unable to climb back up the several hundred foot hill he had slid down.

Rolland also joked about another call he got from a man whose partner had thrown a family heirloom ring off of a deck. Rolland was able to find the ring only to receive another call from the same man sometime later for a similar incident.

Overall, Rolland spoke fondly of his experiences going out to help people with his metal detector.

“Everyone one of them was kind of unique, in their own little way,” Rolland said. “When I go searching for lost jewelry, it’s never the same as the last one or the last one before that. It’s always a little different, and it’s always a different kind of person that’s involved.”

The St. Louis Post-Dispatch reported on one of Rolland’s most recent jobs finding a wedding ring for Walter Tarde, an older man who had just recently lost his wife of 62 years.

In a blog post, Rolland recalled the emotion from Tarde and his daughter who had made the call, and that sort of emotion that’s tied with something as sentimental as a ring is a big reason why Rolland continues to do what he does.

“I think the most important part to me is that I know that I have the ability to help somebody, so I’m gonna go help them and at least do my best to try to find it,” Rolland said.