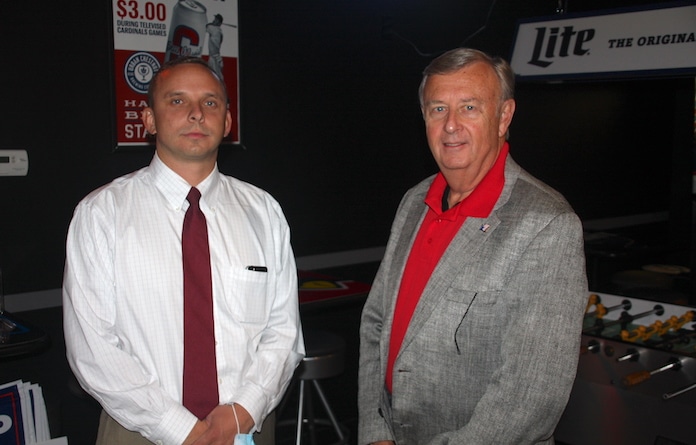 Republican George Green of Maeystown beat Democrat Duane Langhorst of Fults for the seat on the Monroe County Board currently occupied by Republican Bob Elmore.

Green pledged to keep his campaign promise of “Keep Monroe County Great” and provide “service to the people” now that he has been elected.

“I’ll work hard like I promised I would,” Liefer vowed after his win. “I won’t let Monroe County down.”

Those county numbers are with almost all the votes counted, with Monroe County Clerk Jonathan McLean estimating only around 300-400 ballots remain uncounted. Those are various types of ballots, such as provisional or mail-in.

There are not enough uncounted votes to change the outcome of these races.

In the regional races, Republican David Friess won the race to represent the 116th district in the Illinois House of Representatives after getting 64.9 percent of the votes to incumbent Democrat’s Nathan Reitz’s 35.1 percent.

Those numbers are with all precincts reporting.

“The people of the 116th district are ready to end the cycle of corruption and tax increases in Springfield,” Friess said. “I owe this victory to the hard work and dedication of our supporters, and I will not let you down on pushing for ethics reform, holding the line on taxes, and ending reckless spending. I thank Nathan Reitz for his service and wish him the best.”

He had 62.9 percent of the vote to Cates’ 37.1 percent for the seat on the 5th District Illinois Supreme Court.

Monroe County residents went with Overstreet over Cates, with 68.4 percent of voters selecting the Republican and 31.6 percent choosing the Democrat.

In the race for the 5th District Appellate Court seat vacated by Melissa Chapman, Republican Mark Boie won with 60 percent of the vote compared to Democrat Sarah Smith’s 40 percent.

That was with 95 percent of precincts reporting.

Monroe County sided with Boie overall, with 66.56 percent of voters preferring him to the 33.44 percent of people who voted for Smith.

At the state level, it appears the graduated income tax amendment did not pass.

With 98 percent of precincts reporting, 44.9 percent of the votes for that measure have been yes, while 55.1 percent have been no.

Monroe County residents overwhelmingly went with the majority, with 75.52 percent of people opposing the constitutional amendment.

At the federal level, incumbents Mike Bost and Richard Durbin have kept their jobs.

That is with 98 percent of precincts reporting.

“I could not be prouder of the campaign we ran – a campaign focused on our record and our positive vision for southern Illinois,” Bost said. “Congratulations to Ray Lenzi and his team for a hard-fought campaign. Serving the people of southern Illinois in Congress has been the honor of a lifetime, and I thank the people of this district for giving me the honor of representing them for another two years in Congress.”

Monroe County also sided with the majority in this race, with 72.5 percent of votes picking Bost over the 27.5 percent who went with Lenzi.

The county went against the majority in the senate race, as Durbin, a Democrat, beat Republican Mark Curran 52.3 percent to 41 percent with 88 percent of precincts reporting.

Monroe County chose Curran, with 65.79 percent of residents voting for him and 31.85 percent picking Durbin.

The final federal race is for president, and the winner was not known as of press time.

That number, however, does not include millions of ballots that have not yet been counted in various state, including mail-in ballots.

Overall, turnout for this election was the highest it has been for some time.

In Monroe County, 78.4 percent of registered voters participated, which is the highest rate in recent memory. After the remaining votes are counted, participation will be over 79 percent.

“I want to thank all the voters,” Monroe County Republican Central Committee Chairman Ed McLean said. “This was an unprecedented year to try to campaign and also, with the record voter turnout in this county, this is tremendous. The Republican Party will continue to find qualified, electable and committed individuals to maintain the safety, the schools and the economy for this county.”

Just less than half those votes were early votes or votes by mail.