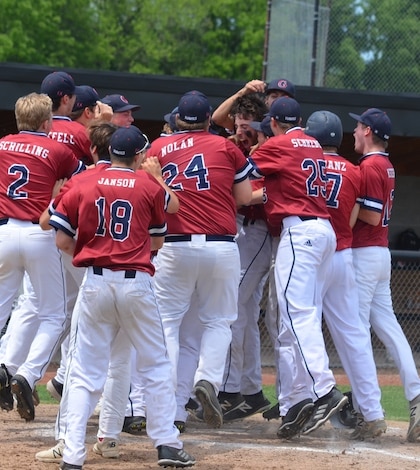 Tim Reinholz could’ve been the goat in the Class 1A Greenville University Sectional final on Saturday.

Instead, he’ll be remembered for one of the most thrilling moments in Gibault Catholic High School baseball history.

Reinholz smashed a walk-off grand slam off the top and over the centerfield fence in the bottom of the seventh inning to give Gibault an amazing 6-3 win over Carrollton. He went 3-for-3 on the day with all six RBIs.

“I knew I had to get those runs in, whether it was to hit it hard or just get a sac fly,” Reinholz said after the game. “I knew that one run had to score.”

Reinholz, who bats right-handed but throws left-handed, started the scoring with a two-run double in the first inning.

Carrollton answered in the second inning, however, stringing together some two-out hits off Gibault starting pitcher Nick Weilbacher to tie the game at 2-2.

Gibault had a chance to regain the lead in its half of the second inning, but a failed suicide squeeze bunt attempt thwarted the threat.

Carrollton, who lost to Valmeyer in this sectional each of the past two years before earning redemption with a 9-8 victory over the Pirates on Wednesday, took the lead in the fourth. Weilbacher got into a jam and was relieved by Reinholz with two runners on. Reinholz walked two batters, allowing Carrollton to take a 3-2 lead.

“I brought him in in a tough spot there in the fourth,” Gibault head coach Andy Skaer said. “He had a little trouble locating it at first and got himself out of it.”

Reinholz worked his way out of a few other jams, going three innings before righthander Mark Branz relieved him for the final two outs of the seventh.

Gibault stranded the bases loaded in the bottom of the fourth, and left more runners on in the fifth and sixth innings. Carrollton also left runners on base. A key factor on defense was the ability of Gibault catcher Josh Papenberg to block pitches and prevent Carrollton runners from advancing.

That set the scene for a dramatic finish. Gibault leadoff hitter Austin Sweeney started the bottom of the seventh with a single to right. That was followed by a single off the bat of Branz. Cole Buckner then surprised Carrollton’s infield with a bunt and all three runners were safe.

“I can’t say enough about those three guys in front of (Reinholz) in the seventh inning,” Skaer said. “Sweeney and Branz had a great approach going to rightfield with base hits there. Buckner comes to me when they call time to go to the mound and was like ‘Hey, I want to bunt. I want to bunt.’ I gave him a strike to hack at… and he’s the best bunter on the team even though he’s our three hitter. And he had the confidence in himself. I had confidence in him. They didn’t make the play. That set us up with the bases loaded and nowhere to put Tim. The story writes itself after that.”

With the wind blowing out to center, Reinholz saw a pitch he couldn’t resist and sent the Gibault faithful home with smiles on their faces.

“Tim had a day,” Skaer said. “A rollercoaster of a day, but he had a great day.”

Gibault (25-8) advances to the Springfield Supersectional, where they will battle Illini Bluffs at 4 p.m. Monday at Lincoln Land Community College.

Reinholz credited the tight-knit nature of this team for the deep postseason run.

“This is the closest team I’ve ever been a part of,” Reinholz said. “(There’s) a lot of chemistry and that’s what’s helped us come this far.”

As further evidence of that chemistry, Hawks players and coaches are wearing pink wristbands and the letters KM on their caps in honor of Kelley Metcalf, the mother of teammate Ian Metcalf who died Sunday following a long cancer battle.

Ian Metcalf pointed to the sky after doubling during Wednesday’s 13-3 sectional semifinal win over Greenfield, which was played just hours after his mother’s funeral.

“These guys are great,” Skaer said. “They’re all pulling in the same direction and they have been for a long time. They know their roles. They know what’s expected of them. We’ve got a special group here and hopefully we can keep on going.”