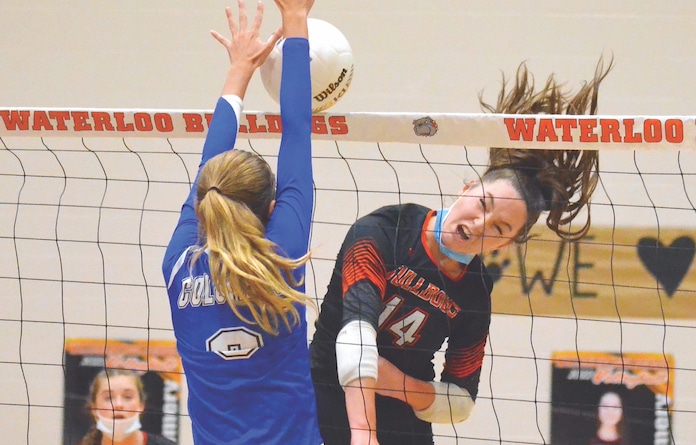 That makes this year’s R-T All-Local Volleyball Team one of the most talented in recent years.

Paige Montgomery, Waterloo. A first team All-Mississippi Valley Conference selection, this senior outside hitter led the Bulldogs with 236 kills to go along with 157 points and 319 digs. She will take her talents to the court at Southern Illinois University Edwardsville.

Brooke Miller, Valmeyer. Another super sophomore, this middle hitter showed her all-around athleticism by recording 333 kills, 203 points and 82 blocks for the Pirates.

Sophie Gill-Kemper, Columbia. Another left-handed hitter, this senior led the Eagles with 208 kills to go along with 243 digs and 154 points.

Markee Voelker, Valmeyer. A junior outside hitter, Voelker was a key factor on the court every night for the Pirates. She had 254 points, 336 digs and 202 kills.

Abby Grohmann, Gibault. Keeping up the family tradition, this junior is a leading force for the Hawks and regularly stuffs the stat sheet with kills and points. She’ll be back for what is sure to be a stellar senior season.

Hailey Montgomery, Waterloo. It would’ve been nice to see her play in that sectional final rather than being injured, but that’s the way it goes sometimes. She finished a fine WHS career with a first team All-MVC nod and 134 points, 125 kills and 30 blocks.

Kierstin Miller, Valmeyer. This sophomore finished with 221 kills, 233 points, 285 assists and 69 blocks for the Pirates and will look for even more success next fall.

Ellie Schwehr, Waterloo. An honorable mention selection in the MVC, this senior setter finished with 594 assists, 169 points and 254 digs.

Jayna Krekel, Valmeyer. A junior setter, Krekel finished with 172 points and 483 assists. Watch out for 2022.

Alyssa Grither, Gibault. This senior will continue her volleyball career at SWIC after being among the team leaders for the Hawks in points and  digs this season.

Addison Walton, Columbia. She finished with a team-high 616 digs to go along with 116 points for the Eagles.

Octavia Heidelberg, Dupo. This athletic senior had 135 kills and 38 blocks for the Tigers.

Emma Day, Waterloo. This tall presence at the net for the Bulldogs received second team All-MVC honors after recording 63 blocks to go along with 165 points.

Kloe Hamilton, Dupo. She led the Tigers with 580 digs to go along with 93 service points.

Katie Toenjes, Columbia. A senior leader for the Eagles, she finished with 280 assists and 117 points.

Mia McSchooler, Valmeyer. A solid sophomore for the Pirates, she recorded 127 kills, 162 points and 336 digs.

Alexa Hildebrand, Columbia. She recorded 145 points and 339 digs for the Eagles.

Kyann Prater, Dupo. She recorded 372 digs and 91 points for the Tigers.

Taylor Holten, Columbia. A senior leader for the Eagles, she finished with 100 kills.