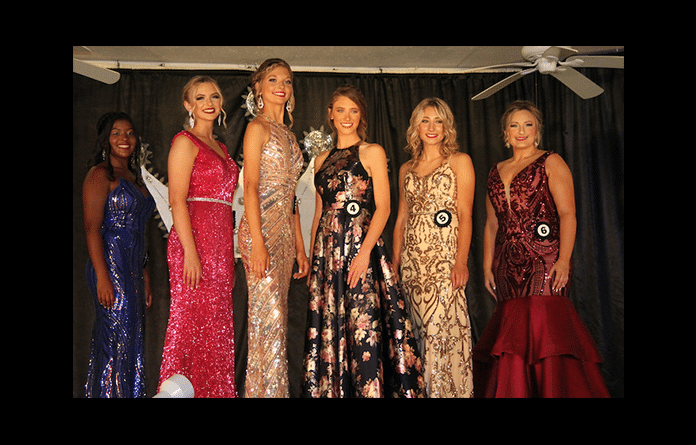 It is now time for 2021 Fair Queen Alexis Mudd and Little Miss Alexa Moore to sport crowns of their own.

In keeping with tradition, the Little Miss pageant was held first. Contestants were interviewed by Ruemker and Stumpf. The reigning royalty asked the girls questions based on their biographies and a “special word” question blindly picked from a fishbowl.

Moore graced the stage in a white dress adorned with sparkles and matching white kitten heels. The 8-year-old daughter of Robert and Ashley Moore of Waterloo was sponsored by Groves Storage, Smiles-R-Forever and Acorns Golf Links.

While chatting with Ruemker and Stumpf, Moore discussed her Christian faith.

“I like learning about God and Jesus because it makes me feel special,” Moore said.

After Ruemker and Stumpf presented Moore with the crown, the crowd geared up for the Monroe County Fair Queen portion.

The pageant began with each contestant giving an original speech on a topic of their choice while simultaneously modeling business attire. As contestant No. 1, Grace Hardin was first to take the stage.

Hardin is the 20-year-old daughter of Dave and Kathy Hardin of Columbia. The Columbia High School alumna’s four sponsors were KAT Taake Custom Jewelry, Sunset Overlook, La Bella Rosa Boutique and Miracle Ear. She spoke of how even though she was adopted from India, Monroe County was the first place she felt she could call home.

Later in the evening, Hardin’s long waves complemented an iridescent fitted gown that showed shades of blue, green and purple in different lighting.

When Mudd gave her personal speech, she led with an anecdote from one of her science school classes of a 4-year-old telling her all about his favorite frog. She connected his passion for the blue poison dart frog to her own career path.

“Through my career in agriculture education, I hope to not only share my love for agriculture with these leaders of tomorrow, but to also help them find and cultivate their passions, whether it be alongside mine in agriculture or it be in blue frogs,” Mudd addressed the crowd.

Mudd’s evening gown stood out among her competitors, as while it did not have loads of sparkle, the satin floral and lace detailing on the back proved to be elegant in its own way.

Her formal attire did not outshine her personality, though, as Mudd handled a curveball question with utmost confidence.

“I have an imaginary box in front of me. What’s inside it?” Master of Ceremonies Brandon Luttman asked Mudd.

Without a moment of hesitation, Mudd replied, “Seeing as it’s an imaginary box, I would say there’s nothing inside of it.”

Mudd said she was “totally shocked” by her new title of fair queen. She is now looking forward to attending Southeast Missouri State University in Cape Girardeau, Mo., this fall and continuing teaching children about agriculture.

“I just want them to know that whatever they need, I’m always here for them. (No matter) what path they choose to follow, I will be their biggest supporter from day one,” Mudd said.

Mudd is a recent graduate of Waterloo High School and is the daughter of Scott and Liz Mudd of Red Bud. She is sponsored by The Backyard Child Care Service.

Contestant No. 2 was Cadence Shipes, who dazzled the crowd in her glittery red dress and in the individual questions portion. Luttman asked her what legislation she would introduce if given the chance.

“Personally, I believe that since 16-year-olds can work, 16-year-olds should be able to vote because as a 17-year-old, I get taxed on my paychecks. It’s taxation without representation,” Shipes said, prompting loud applause from the crowd.

Shipes is the daughter of Bryan and Christine Masse of Valmeyer, and will be starting her senior year at Valmeyer High School this fall. She was sponsored by Frank Zykan Safe and Vault LLC and George Obernagel.

Also representing one of the county’s villages was Michaela Runge of Fults. She is the 20-year-old daughter of Craig and Christine Runge. This fall will mark the WHS alumna’s second year at SWIC, where she is a dean’s list student. She was sponsored by Twice as Sweet, LLC. Her mermaid-style gown stood apart from her competitors, as it was the only dress with that shape.

Runge closed the opening speeches with powerful testimony about being born with a bilateral cleft lip and no palate.

“I was fortunate that after numerous surgeries all of my differences are solely cosmetics. Although my birth deformity is still visible, it doesn’t cause me to shy away from accomplishing my goals. My everyday goal is to empower those around me … I do this by using my own experiences as an example,” Runge told the crowd. “My birth deformity does not only function as a reminder to be grateful for everything that has happened to me, but also is a symbol of strength. In return, it causes me to be fearless, or much rather, it reminds me that I was simply made to stand out.”

Riley Middendorf was named Miss Congeniality by her fellow competitors, and her confidence in her business ambitions show why. The 18-year-old daughter of Waterloo’s Mike and Ellen Middendorf hopes to purchase shares in Middendorf and Reuss Construction, and is debating eventually getting a Master’s in Business Administration.

She stunned the crowd with her soft gold form fitting dress.

In her opening speech, Middendorf spoke of her late grandfather’s role in inspiring her love for livestock. She shared two of the biggest lessons he taught her: “To dream big and nothing is impossible if you set your mind to it.”

The fifth young woman vying to be the 61st Monroe County Fair Queen was Reece Diekmann of Waterloo. She is the daughter of Paul and Lori Diekmann and is sponsored by Dietrich Bank and Quality Rental and Sales.

Diekmann stressed the importance of pageantry during the individual questions portion while donning a gold dress with exceptional detail.

“It is representing your community, your town, all of Monroe County,” Diekmann said.

Both pageants honored Yvonne Fehrenz, who served as director from 2008-2020. She retired in January, prompting 1995 queen Leanna (nee Johanning) Stechmesser and 2009 queen Amanda (nee Stumpf) Klein to take on the role for this year.

Toward the end of the fair queen pageant, she got out a long list of people to thank, prompting a chuckle from the audience.

“As pageant director, I’ve learned many things from many people, including my queens and little misses. I’ll be grateful for all the ideas and hours you have contributed,” she said.

For more pictures of the Fair Queen and Little Miss Pageant, click here.

The fair continues through Sunday. For more on the fair, click here.