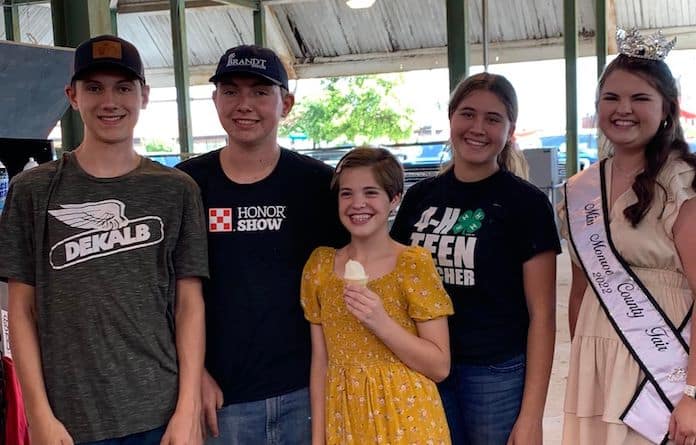 A number of individuals who had presented at the recent Monroe County Fair went on to successfully represent this community at the Illinois State Fair in Springfield.

Monroe County University of Illinois Extension 4-H Youth Development Program Coordinator Kelly Brandt pointed to a number of these projects, including Jack and Luke Kennedy, who have attended the fair with their own aerospace displays for several years.

Brandt also mentioned Kaleigh Halleran, who presented a unique entomology display which will also be displayed at the Butterfly Festival this Sunday at the Baebler Educational Farm south of Waterloo.

“I talked to her about it last year at state fair. We noticed there weren’t very many etymology projects, and she decided to do it,” Brandt said. “She took it full force and ended up getting a champion.”

Also among those who presented at the state fair was Clark Deptula, who shared a history of his family heritage – specifically an ancestor who created a lantern that was used on trains.

Clark and his mother Julie Deptula spoke about their time at the state fair, including their early departure and rush to get to the fairgrounds in Springfield as well as the food trucks which Clark described as “scrumptious.”

“It’s a great experience, I mean, for anyone to get a chance to go,” Deptula said. “It’s something that you would hope anyone could because, it’s bigger than Monroe County to say the least.”

Brandt also emphasized the educational opportunity the fair allows young people to experience, particularly in the realm of agriculture. She also spoke about the generally positive experience folks can get from attending and participating.

Brandt recently allowed her own children to participate, missing the first day of school along with several other kids whose parents made a similar decision.

“It’s just unfortunate that a lot of kids miss out on the opportunity to go to the state fair because of school conflict,” Brandt said.

Longtime Monroe County 4-H and agriculture supporter George Obernagel shared his thoughts about the state fair, describing how the fairgrounds and structure of the fair have improved over the last few years and are continuing to get better.

Obernagel, who participated in the Governor’s Sale of Champions livestock and commodity auction last Tuesday, also emphasized the sheer scale of the fair, pointing to how many individuals from outside of Illinois come to participate in the various showings and competitions.

“I think we could be one of the best fairs in the country,” Obernagel said.

Here’s a listing of locals who participated in the Illinois State Fair:

Cory Stumpf of Columbia and Ava Gilbert of Fults each received a first place ribbon in the Hereford category.

Luke and Ava Gilbert of Fults both received first place ribbons in the Simmental category.

In beef breeding, Stumpf and Gilbert both received first place ribbons in the Hereford category.

Those who also placed include Kayleigh Halleran of Waterloo.

Those who placed include Logan Henerfauth of Fults.

In junior market lambs (wethers only) those who placed include Lydia Henerfauth of Fults.