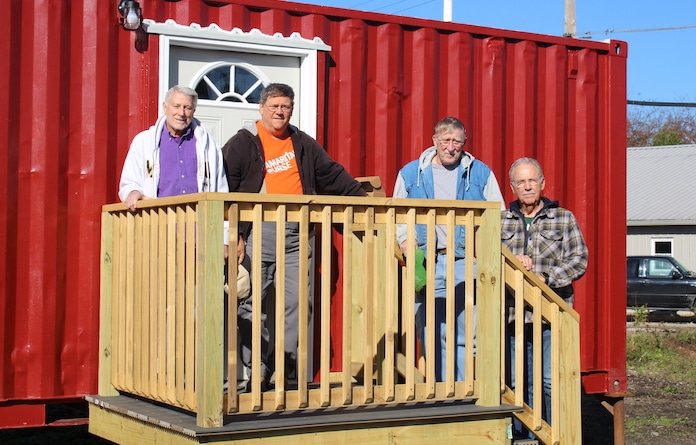 Many Monroe Countians are making a big difference in the lives of Washington Park residents through a very special ministry.

As its website states, Good Samaritan Ministries of the Metro East’s overarching mission is “to promote positive change in Washington Park by equipping people for Christ-like living.”

The nonprofit does this in a variety of ways.

On the educational front, volunteers help local children complete their homework and obtain school supplies at the ministry’s after school program, as well as help fund Christian school tuition.

So far, the ministry has helped three kids go to college. The ministry also supplies meals, laundry and clothing services and will soon be ready to kick off its new housing initiative, which will provide additional housing options and rehabilitate existing properties in the Washington Park community.

All of this, director JoAnn Axe said, is possible through donors and volunteers, approximately half of which are from Monroe County.

“We don’t get any government support because we’re a Christian-based organization. Years ago, the board decided not to go that route because we wanted to be free to share the Gospel. So, to pay the light bill, to pay the insurance (and more), all of that comes from donors,” JoAnn said.

Like every other organization, COVID-19 had a big impact on GSMMetro’s operations. In order to avoid large crowds in the building, GSMMetro stopped having Bible study groups and hosting church services.

Yet, it was clear many still needed food service. With the help of many volunteers, the ministry found a way to continue meeting this need while also providing spiritual guidance.

“We really didn’t miss a beat,” JoAnn said. “We have lots of volunteers who come and they take food out on Thursdays to about 90 people. We stop, we pray, we witness and we talk. It’s going well.”

Much of GSMMetro’s leadership has ties to Monroe County. In fact, JoAnn and her husband, Ralph, reside in Waterloo. She first came to the Washington Park area to provide pregnancy services, but then soon felt called to serve the area full-time.

“That was 11.5 years ago,” JoAnn described. “I am a missionary from Hope Christian Church coming 30 miles up the road, and Hope has kept that relationship with this ministry for all these years.”

Darrell Jones, Hope’s founder and lead pastor, and other church members have helped GSMMetro on-site. JoAnn said Jones has even helped dig trenches on the property before.

Members of other Monroe County-area churches are also actively involved in the ministry.

It was through his church that he met JoAnn.

“I go to Faith Lutheran in Columbia and JoAnn was speaking there. We had just finished a project at Faith Lutheran re-doing the church and I was kind of bragging, showing JoAnn this and that, and JoAnn said ‘I got a job for you, you’re just the guy I need!’ That’s as complex as it was; she recruited me and I was happy to do it,” Moll recounted.

As JoAnn explained, the Housing Initiative consists of two main parts: First, container homes are being built on the ministry’s property. Currently, five homes are in the back of the ministry’s building, and will be ready to be inhabited within the next couple weeks.

Moll said he hopes to have 15 of these homes in the future.

Each 160-square-foot home – made from converted railcars – contains a twin-size bed, mini fridge and microwave, counterspace with a sink and a bathroom. Individuals, churches, organizations and other entities pay to construct one or more homes in full. The cost to complete a home is on average $15,000.

Hope will be sponsoring one of these homes in the future.

The first five men to be housed are all individuals who frequent the ministry who meet a specific criteria.

“We determined a couple of years ago that (the container homes) are going to be for men 55 and older because they’re the ones who were coming in here that were sleeping in abandoned houses,” JoAnn said. “There are resources for women and children, but there were none for this demographic.”

With Baxmeyer Construction of Waterloo loaning equipment and Ralph Axe’s experience operating such heavy machinery, the team was able to clear and prepare the land for the container homes. Ralph worked as a pipe fitter for Mallinckrodt.

Elaine Adams, a Monroe County lawyer who has a background in housing, is helping determine who would be the best fit for future container homes.

“She’s heading up the team that’s putting all of the documents, contracts and paperwork together,” JoAnn said, noting those who wish to live in the container homes must apply, and, if approved, pay small rent.

Currently, the ministry is in the middle of its annual fundraising campaign, which includes a video on its website detailing its plans for the future. This includes the second part of the Housing Initiative: Starting a non-profit construction company to help revitalize homes in the area.

JoAnn explained a lot of neighboring homes are in need of repair and may not necessarily be safe. Through starting this construction company, GSMMetro hopes to change that.

Moll said this is proving to be the most challenging part of the initiative.

“Anybody that’s been in construction realizes it’s real easy to start from the beginning (with) a nice field and build something,” he said. “But, to take something and change (or) convert it … is really hard.”

Moll is working with a team of men with similar engineering and construction backgrounds on the Housing Initiative, including Monroe County native Jack Latchem, who oversees all electrical work on the container homes, and a few men from Concord Baptist Church in South St. Louis County.

One of these men is Larry Summers, an engineer who retired from a career in managing manufacturing 13 years ago.

Similar to Moll, Summers said the ministry’s passion kept him volunteering in Washington Park long after he first helped the GSMMetro team work on a neighbor’s porch.

“Once you meet JoAnn and you capture her excitement about serving, it’s contagious,” Summers said. “Her vision that God gives her is so drawing and so contagious to each of us that it keeps us coming back.”

JoAnn said while each GSMMetro volunteer has their own unique skills, they all have one thing in common:

The Sophia and Elmer Oerter Charitable Foundation donated funds approximately four years ago to build an industrial arts center, but they have helped the last six years to finance various projects, such as the basketball court.

“The Oerter Foundation in Columbia gave us a large chunk of money to build that addition, and that’s meant to teach beginning trade skills to junior high, high school and young adults,” JoAnn said of the attached Oerter Industrial Arts Center.

To learn more about GSMMetro, visit gsmmetro.org. To view the virtual fundraising banquet video titled “Building the Future 2021,” click on the 2021 Fundraiser Tab. Those who feel compelled to do so can give online.

To volunteer with GSMMetro, fill out the form under the “connect” tab.