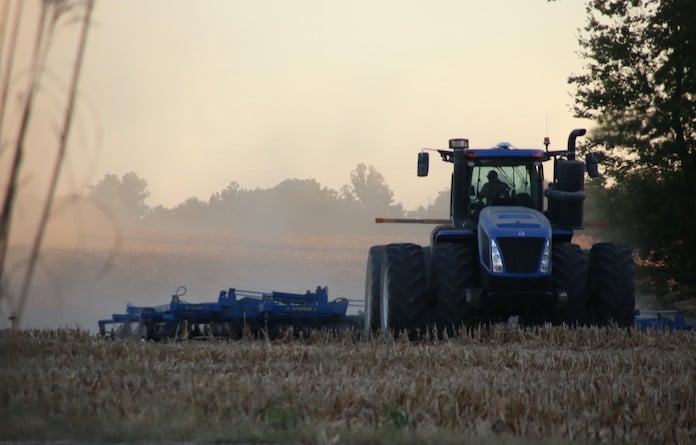 The fall harvest is underway for Monroe County farmers and with dry weather, input costs and an extremely low Mississippi River, results are mixed.

Gateway FS Grain Division Manager Adam Parker said the harvest season has generally been positive for farmers as the clear weather has allowed for plenty of productivity.

“Weather has been favorable,” Parker said. “There hasn’t been many rainouts, so farmers have been able to get in there and harvest the crops and then they’re going to plant wheat, have had good opportunities to plant wheat.”

“Yields are coming in a little bit below expectation, at least the earlier stuff, but we did have a dry summer, right?” Biethman said. “So expectations were not as high as last year. I am very confident in saying that the yields are 10-15 percent off last year.”

With harvesting still ongoing, Biethman said this has been an especially difficult year to gauge yields due to the weather.

Biethman spoke about the break that occurred in planting due to heavy rains in May, resulting in some especially early and late planting.

Farmers who had to plant corn in June are now being forced to keep it standing as its moisture remains too high.

With these and other struggles including the high cost of fertilizer and other essentials for farmers, Parker’s description of this year’s harvest was mixed but generally positive.

“Prices are still what I would consider above average, but given how much it cost to put the crop out and the fact that we more or less have an average yield, it definitely is not as good as what it was last year, but still an overall pretty fair year,” Parker said.

The biggest factor in this harvest season, according to Parker, has been the Mississippi River and its historic lows as of late.

For Monroe County farmers, the river serves as the primary means of exporting their annual crop.

Lower river levels have meant barges traveling along the river have been unable to carry their usual freight, with the typical haul of 70,000 to 75,000 bushels reduced to 50,000, according to Parker.

According to U.S. Department of Agriculture weekly traffic statistics, barges carrying corn and soybeans on the Mississippi River system for the peak weeks of harvest are down by double-digit margins as compared to this time last year.

The low river level has also resulted in a sharp increase in barges and ships running aground needing assistance.

“So about every third barge, we’re having to load an extra one, basically, just because of how shallow the river is, so that’s impacted us negatively,” Parker said. “Barges along the Mississippi are grounding to where they’re having to shut parts of the river off for them to come in and dredge, make the channel deeper to get boats and barges through.”

Biethman said this increase in demand for barges has had a big impact on farmers in the area who are already having to deal with heightened transportation costs on their end due to the price of diesel.

He expressed that it’s not free for farmers to get their crop from the field to the elevator, and as such many have ended up going to the nearest elevator instead of the one that would give them the best price.

Among local farmers, feelings are similarly mixed, though the impact of the Mississippi River can clearly be felt.

“Every day, we’ve been busy,” Niebreugge said. “With the dry weather, we just keep going. But most of our yield has been good.”

He also commented on how the river has caused the crop basis at the local river elevator to drop.

Rich Guebert of Red Bud also spoke about issues he’s encountered with the basis at his nearest elevator.

Despite the yields he described as “pretty decent,” the low basis for him has had a significant impact on profits.

“It’s been challenging,” Guebert said. “With the low river level, the basis level has just gone to pieces. Right now corn is a negative $1.20 at our elevator which is a barge loading facility, and beans are a $1.30 negative, so it’s not very good if you’ve got crops to sell.”

Mueller was generally hopeful about the end results of this year’s harvest, even with the damage the low river has caused.

“It’s going to be an OK year,” Mueller said. “Basically all of the input costs have skyrocketed higher and now the prices have gone lower from the basis issue. So profit-wise, I think we’ll actually make less money this year than we did the last couple of years.”