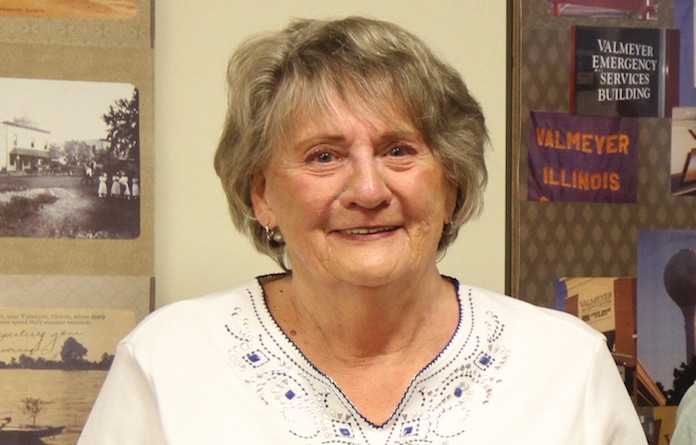 In the small Valmeyer community, many public servants have been helping the village in one form or another for decades.

One fewer person will now fit that bill, as Jean Langsdorf ended her term on the village board after almost three decades.

“I’m 79, and I think that’s enough time. I figured it was time to step down and let somebody else have a chance,” she said.

Born and raised in Valmeyer, Langsdorf said she has lived in the town for all but three weeks of her life, and those three weeks were in Columbia after the Flood of 1993.

She began serving in the village in a planning role, including leading a committee after the flood that focused on issues like streets.

“We were asked our opinion and that sort of thing,” Langsdorf recalled.

She then took a much more formal role in April 1994 when Art Ford retired from the village board.

At the time, Langsdorf said she wanted to serve on the board “just to get the town back to where it was.”

“Of course, that didn’t happen, but I think we’re in better shape,” she said. “I tried to help build a town that we could be proud of.”

Specifically, Langsdorf said she was proud of the Bluff Road connector and the village purchasing the quarry property that eventually became Rock City, which she credited the “tenacity of Dennis Knobloch” for making happen.

“And now, with the Waterloo water program, I’m really glad to see that because that was one of my visions was to get Valmeyer back in the water business,” Langsdorf continued. “I know we had Fountain water, but I thought we needed Valmeyer as a water source, and now we will have Waterloo. So that will be great.”

Another accomplishment Langsdorf highlighted was her work as chairperson of the architectural review committee, which helps situate businesses in town.

“We don’t have too much to do now, but we did just have Dollar General,” she noted. “We just look at where they’re going, how they’re doing and that type of thing.”

In all her work, Langsdorf said the only notable challenges came with major projects like purchasing the quarry property because the village board works well together.

“I think we were all on the same wavelength, so there was no controversy,” she said.

Even without that type of stress, Langsdorf decided to step down after having health problems that required surgeries in the last year.

Robert Nowlan ran unopposed to take over for Langsdorf.

Valmeyer Mayor Howard Heavner praised Langsdorf’s tenacity and heart for the village at recent board meeting.

“We have never doubted her sincerity about wanting the best for us,” Heavner said.

He added that Langsdorf always “believed in what we were doing” as a village and did not hesitate to bring up issues for the betterment of Valmeyer.

Heavner noted that her willingness to discuss some matters often prevented future problems from developing.

“If it needed to be brought up, she brought it up,” Heavner concluded.

With her elected service now over, Langsdorf said she is happy with her work.

“I’m pretty proud to be able to help in the building of a town that we can be proud of,” she said. “This is where I wanted to live my life, and I got to do that. I feel privileged and honored to be able to serve on the board.”