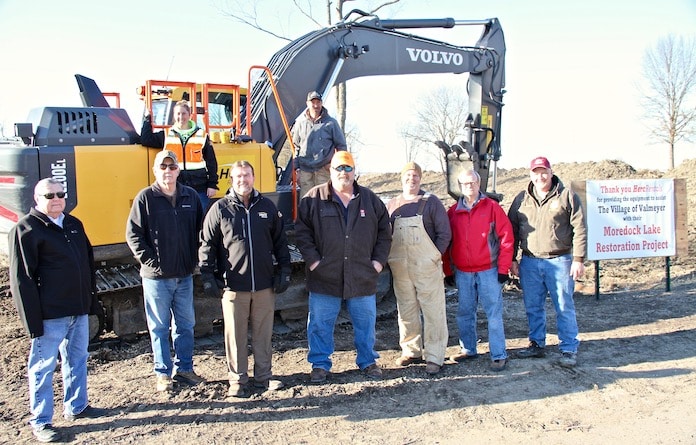 Valmeyer is emblematic of the “it takes a village” mentality.

In relocating an entire community or, more recently, revitalizing an under-used property, residents have historically shown they can work together for a common goal.

Using mostly volunteer work, a trio of lakes in Old Valmeyer are in the process of being reintroduced to the public as part of the Moredock Lake Restoration Project.

The area near John Casper Lane and Moredock Lake, when finished, will include a recreational fishing area and walking trail and provide a complement to the nearby Salt Lick Point Land and Water Reserve, Borsch Park and playground.

One of the ponds is already stocked and has been used by local fishing enthusiasts in the past months. Another planned improvement will include planting trees, some from a tree farm in New Valmeyer, and others the village has already ordered.

Valmeyer Village President Howard Heavner said there is much “nostalgia” regarding the lakes, and there was an extraordinary amount of interest in the area when the project was discussed a few years ago.

The recent work, which Heavner says is about one-third completed, began as the result of conversations during comprehensive plan development in 2020.

In reality, it has been in progress for over 30 years, he added.

Heavner said the area was a planned project for the Valmeyer FFA in the late 1980s. He recalled efforts were made “to pump water (into the ponds) with varying degrees of success, but after the flood (of 1993), little was done.”

Former Valmeyer Village President and current Village Administrator Dennis Knobloch said the project has “been a long time coming” and credits hard work from residents who “really jumped in with both feet to volunteer and get the project started.”

Once preliminary plans were in place, Valmeyer residents such as Vince Siburt and Rich Dependahl, both of whom also helped with the Salt Lick Point trail project, began volunteer work to clear brush and other foliage which had grown up in the past several decades. Through their work and other volunteers lending a hand, a walking trail has begun to emerge from the landscape and one of the ponds is now usable.

The project got a big boost late last year when Valmeyer resident Terry Crossin offered use of heavy equipment  to help dig out some of the lakes.

Crossin, who is a sales manager for St. Louis-based Herc Rentals, told the Valmeyer Village Board during a December meeting that Herc wanted to be more involved in community efforts and the company would waive its rental fee for the village to use large equipment such as an excavator – provided the village pay for freight expenses to move equipment to and from the site.

Heavner said rent-free use of this equipment saved the village several thousand dollars.

During the middle weeks of January, the equipment was delivered and put to use, making the lakes deeper and removing sediment left by years of soil erosion.

Heavner noted creating sustainable bodies of water in this particular section of the Bottoms comes with a unique set of challenges.

One of those challenges, ironically, is keeping water in the lakes.

Digging out sediment and making the lakes deeper will help capture existing water and lessen reliance on other methods such as pumping from nearby sources, Heavner explained.

He also pointed out the soil composition in the area paired with the varying stages of the water table results in differing levels of water availability depending on season and the amount of local rainfall.

To deal with the changing hydraulic conditions, a plan is being developed for maintaining water levels.

While details are a work in progress, the goal of creating an attractive property for the community remains the same.

Heavner explained it can be difficult to complete projects that combine volunteer work and  local government involvement, but the village will use “the same method to revitalize lakes in the old town” as it did with the creation of nearby Salt Lick trails.

The method, he explained, lets volunteers do what they can with the village stepping in when extra resources are needed.

Both Heavner and Knobloch emphasized the amount of work these volunteers have already put into the project.

Heavner compared it to having “diamonds in the ground. You just need to dig them up and polish them.”

The digging has already begun. With some more work it will soon be time to polish, and the community  effort may create a gem in the old town.