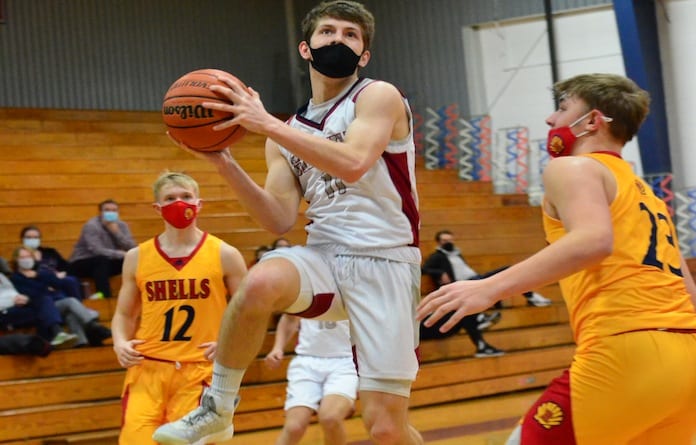 The Gibault boys basketball team returned to action for the first time in nearly a year with a 41-39 win in double overtime at home Monday night against Roxana.

High school basketball was allowed to compete following the metro east region’s move to Phase 4 of the state’s Restore Illinois coronavirus recovery plan on Thursday. Among the restrictions placed as a result of the pandemic include a limit of 50 spectators at home games, masks worn by everyone and no jump ball to start the game.

The Hawks and Shells played evenly throughout the game, with neither team creating much distance on the scoreboard. The game was tied 17-17 at the half.

Roxana led 34-32 with just 3.5 seconds remaining in regulation when Gibault sophomore Kameron Hanvey took matters into his own hands. He drove the length of the court for an uncontested layup at the buzzer that bounced around on the rim before falling in, sending the contest into overtime.

The first OT saw both teams record just one basket, so a second extra frame was needed.

The Shells clung to a 39-36 lead before Gibault senior Ryan Bollinger nailed a three-pointer to knot the score at 39-39 with 1:17 remaining. Hanvey followed with a basket that turned out to be the game-winner for the Hawks.

Hanvey, who led Gibault in scoring last season as a freshman at 10 points per game, scored 14 to lead the Hawks. Bollinger and Jude Green each added eight points and seven rebounds.

Weather permitting, Gibault plays at Metro-East Lutheran on Thursday and at Father McGivney on Friday.

For photos from Monday’s game, which are available for purchase, click here.