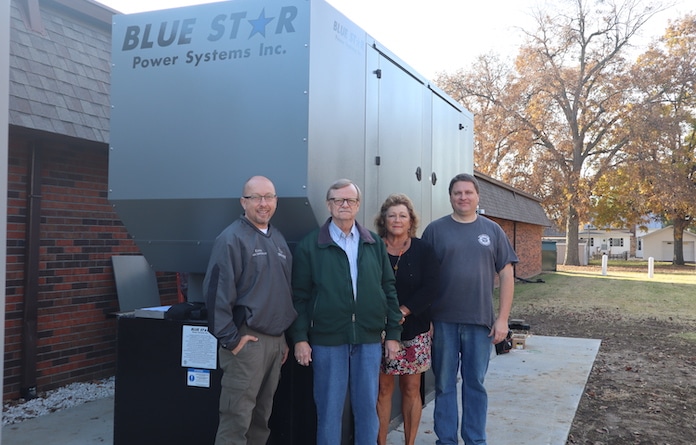 The Monroe County Emergency Management Agency has been pushing to install generators in community centers around the county for the sake of disaster preparedness.

Monroe County Public Safety Director Kevin Scheibe said he approached the Monroe County Board to discuss the project some time ago.

The project only recently saw its first results with the flip-switching of the newly installed fixed generator at Hecker Community Center several weeks ago.

There are currently a number of disaster relief shelters in the county that have been partially approved by the American Red Cross.

Scheibe said these facilities have been unable to receive full certification due to the lack of a fixed generator.

He hopes this project will make a Red Cross certified shelter readily available for every residency in the event of a disaster such as a flood, tornado or earthquake.

“My goal and my projection is to have one in each community – Hecker was the first one – so if there would ever be a disaster in Monroe County and we need alternative housing or shelter, we would be able to use everything,” Scheibe said.

Facilities with fixed generators already exist in Waterloo and Columbia.

Hecker was selected as the starting point of the project as the community center runs entirely on electricity, not making use of any gas in its utilities.

The community center was also selected given its size and thus its ability to house a great many people in the event of an emergency.

Scheibe said generators are also currently planned at St. John United Church of Christ in Maeystown and St. John UCC in Valmeyer, though they will likely be smaller than Hecker’s.

He added that generators are also planned for locations in Waterloo and Columbia, though final agreements on those locations have yet to be reached.

Scheibe explained that, in a situation wherein a significant part of the county or community was without power, these disaster relief shelters would be used to house those affected.

“We have memorandums of understanding with each of these facilities,” Scheibe said. “If something would happen, that facility would open up, American Red Cross would take over under the direction of myself, the emergency management director … and we would be able to operate 24/7 for these people if there was no electric.”

“ARPA funding is supposed to be used for what we can give back to the community, community resilience, improvements for disaster response, just generally anything that will help the community,” Scheibe said.

Per agreements with the involved communities, Scheibe said the county will pay for the generators and their installation through ARPA funds while the communities themselves will be responsible for maintenance and upkeep.

While the county has access to mobile generators, Scheibe explained that Red Cross certification demands a fixed generator for the facility.

Further, mobile generators alone simply wouldn’t be feasible in the event of a severe disaster.

“Our mobile generators, they’re unique and they’re good for smaller operations, but when you’re talking a whole building, y’know, running it for 14 days, 21 days, 28 days straight, the portable generators are not as sufficient as a fixed generator,” Scheibe said.

Scheibe also described some of the challenges the county has had in securing these generators, as resource availability has posed a particular issue in getting them in a timely manner.

For the next planned installation, Scheibe said he was told the generator likely won’t be available for over a year.

While the generator installation in Hecker encountered a similar waiting period, Hecker Community Center President Michael Karban is quite pleased with the results.

Karban said the installation took some prep work as the community center wanted to replace the facility’s aging switchgear first.

Having put in that effort, Karban said the new generator brings a sense of security in the ability of the community center to meet Hecker’s needs.

“At the end of the day it was pretty much just for peace of mind. The community center is a totally 100 percent electric facility, there really is no gas utility to speak of,” Karban said. “Having this standby generator is definitely reassuring that the community center can function and carry on and have events in the event of a commercial power failure.”

Peace of mind is a core part of the project for both Karban and Scheibe, who reiterated the safety of Monroe County residents is the project’s main goal.

“If we have a disaster in Monroe County, we want to make sure that the residents are housed and have appropriate shelters for safety to go to and stay during their time of need,” Scheibe said. “That’s the biggest thing for this.”