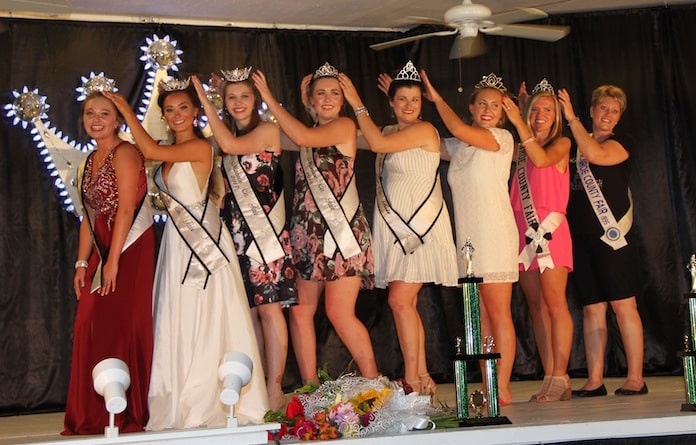 The 1995 and 2009 Monroe County Fair Queens are teaming up as co-directors of the pageant following longtime director Yvonne Fehrenz’s retirement.

“The fair is kind of in you when that’s what you do your whole life,” 1995 queen Leanna Stechmesser said. “When you help build something to where it’s at today, you don’t want it to fall through the cracks or slip. We wanted to continue on with the great tradition of our pageant that we have.”

Fehrenz retired in January after she moved out of Monroe County, which prompted Monroe County Fair Association President Don Schrader to ask the women if they would like to serve. Both had been serving on the pageant committee since their reigns ended.

“I wanted to be able to keep it in the family, so to speak,” Klein said. “By Leanna and I taking over, it makes it as smooth of a transition as possible.”

Both women said they know they have enormous shoes to fill as Fehrenz’s successors. She has been volunteering with the pageant since the year Stechmesser won.

Fehrenz said she got involved a quarter-century ago after then-pageant director Judy Edler said it would be nice to have someone backstage to assist contestants with makeup.

Fehrenz was doing that for one of the contestants, so she began doing it for all of them at the local level and for the queen at the state level.

In 2008, when Leslie (nee Gummersheimer) Heutel stepped down as pageant director, Fehrenz took over. Over the next 12 years, Fehrenz said she worked many “very long” but “very rewarding weeks.”

“It has been an amazing opportunity to represent the Monroe County Fair in any capacity of the pageant, especially as the pageant director,” she said. “I have been privileged to work with queens and little misses who love every minute of their time spent at the fair week meeting new people, awarding ribbons and trophies to winners, enjoying fair food, doing countdowns for demolition derbies, judging number of crows at the rooster crow contests, and (attending) so many other fair events.”

Fehrenz credited the fair association and the hundreds of volunteers with helping make the pageant  – and fair overall – so successful during her tenure.

Stechmesser said Fehrenz was a critical cog in that machine.

“Yvonne has done a fantastic job building our pageant,” she said. “She has been a great face of Monroe County in our state and district, as well. She’s done a great job, and we hate to see her go. We’re going to miss her.”

Fehrenz, whose business remains in Columbia, said she will still be in Monroe County because it will “always be (her) home county” and plans to attend upcoming pageants and fairs.

On the pageant side, Klein and Stechmesser said there will most likely not be any immediate changes to the event besides those necessitated by the pandemic.

“The pageant itself has a good base, so there’s not much that we want to change,” Klein said. “Obviously, there’s going to be adaptations with COVID and all the new guidelines. Our most immediate goal is to get girls signed up and start working them with the pageant this summer. It’s our goal to make sure we can go through with the pageant and fair.”

For those interested in competing in the pageant as either a queen or little miss candidate this year, there will be an informational meeting March 20 in the fine arts building at the Monroe County Fairgrounds.

In both those roles, particularly as queen, responsibilities include representing the fair and Monroe County during fair week at community events and at the state fair and serving as an ambassador for agriculture.

Little miss contestants must be 6-8 years old and be Monroe County residents. Queen candidates must also live here and be 17-21 years old.