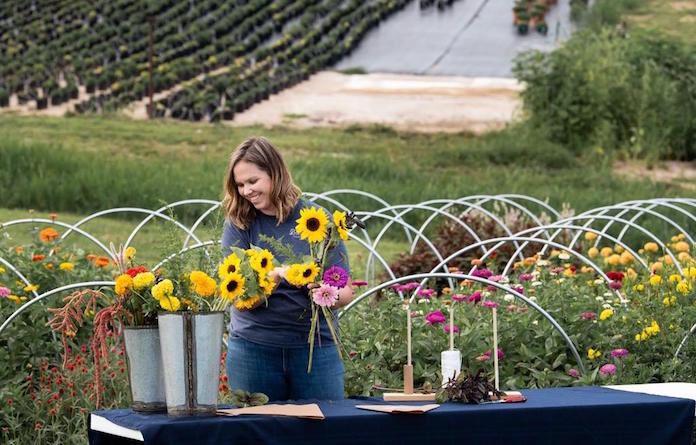 Carrie Koester is known to many in Monroe County as the former FFA teacher at Columbia and Waterloo high schools, but she may soon develop a reputation as a purveyor of picturesque flowers.

That is because Koester is the owner of Barnside Flower Farm, a cut flower business in Red Bud.

Koester began considering opening a business like Barnside Flower Farm about five years ago while she was still working as a teacher.

At the time, she was growing 500-900 mums each summer and selling them in the fall under the name Barnside Nursery.

After the birth of her and her husband Aaron’s fourth child, however, Koester decided she wanted to stay home with her family but still find a way to stay busy.

So, last year, she began working in earnest on Barnside Flower Farm, offering a small portion of the services she does now.

She and Aaron bought 15 acres of land previously owned by her great uncle, who recently died.

Her farm is now on her family’s old homestead, which is where her grandfather was raised.

“It was really meant to be,” Koester said.

The family then got to work preparing the land for their purposes.

That included building a greenhouse, planting perennial flowers, preparing flower beds and more. They even started working on building their own house on the property.

After all that, the business truly began this spring.

For now, Koester is only offering bouquets that people can pick up at Stubborn German Brewing Company in Waterloo or De Vinos Winery in Red Bud. She is also delivering to some local florists.

Despite the minimal offerings and the fact that the farm opened around the time the pandemic began in the United States, Koester said it has been going well.

“Business has been fantastic,” she said.

In some ways, the timing actually helped because flowers could not be imported from other countries because of COVID-19, making the wide variety of speciality cut flowers Barnside Flower Farm offers much in demand.

As she gets more experience and the business grows, Koester has two main areas she wants to expand.

Starting this fall, she plans to introduce an education component to the farm, which is important to her as a former teacher.

She will offer tours of the farm that include teaching patrons to create a floral arrangement inside a pumpkin. Additionally, Koester plans to instruct small groups of people on some basic gardening topics.

“I’m continuously trying to increase the education part (of the business),” she emphasized.

Next year, Koester said she will offer a subscription service so people can get fresh bouquets at set intervals. She currently has some customers who get new bouquets every week.

“That’s going to be a big one for us,” Koester said of that addition.

Those who purchase flowers from her have found that they have some benefits because they are local, according to Koester.

Typically, flowers are already as much as a week old when consumers get them because they must travel to floral shops.

Barnside Flower Farm’s products, however, are often cut within a mere day of going to customers.

“The biggest thing is we are local, and our flowers are going to last longer because of that,” Koester explained. “That’s not to say the flowers at florists like some of the ones we work with are bad. They’re good flowers. Ours are just that much better.”