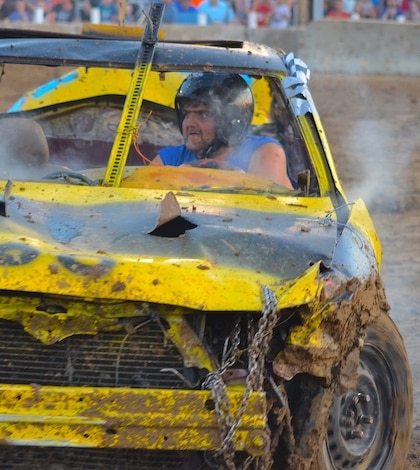 The Monroe County Fair Demo Derby got off to a blazing start Friday night and continued with some heavy hitting before limping to the finish.

A capacity crowd witnessed a thrilling first event as the bone stock compact class kicked off the night. A fuel tank rupture on the No. 17 car driven by Jarrett Huebner of Waterloo with riding partner Reed Juengling led to a tense moment when the front of the car burst into flames. Fortunately, Huebner and Juengling escaped the burning vehicle without injury.

In the end, the No. 40 car driven by Justin Huelsmann with riding partner Aaron Hediger of Highland placed first.

The second event was the highlight of the night as a dozen cars competed in the bone stock full-size class. The No. 33 car of Waterloo’s Andrew Christ and Gabe Reeser administered some huge hits early on before veteran derby drivers Mike Seymour of Waterloo and Brad Yearian of Fults displayed their experience. The No. 68 car of Highland’s Thomas Budde seemed to be making a push for a trophy until multiple cars smacked him around and took him out.

The No. 42 car of Glenn Lutman of Ellis Grove ended up the winner in this class, followed by Yearian’s No. 76 car and the No. 118 station wagon driven by Waterloo’s Alex Schilling with riding partner John Busch.

The crowd expressed disappointment with rounds of boos during the modified class event, as nine cars mostly played cat and mouse with few solid hits. The No. 29 car of Columbia’s Bryan Lehr was nearly knocked over the concrete wall and the action finally picked up toward the end. The No. 23 car of Waterloo’s Andrew Robert eventually emerged victorious and Don Santel of New Memphis placed second.

The final event of the derby was the semi stock class, which featured 15 monstrous cars. The action was fast and furious at the onset with a seemingly drier track to work with. The red No. 99 car driven by Dylan Allscheid of Fults and the No. 46 car of Waterloo’s Tony Ahrens traded big hits before multiple cars made consistent collisions with Allscheid to take him out.

The semi stock class came down to the final three of Ahrens, Jody Braden of McLeansboro and Shawn Seymour of Waterloo. Ahrens and Seymour exchanged hits and Braden hung around for a bit but the two locals were the ones left standing at the end. The cars of Ahrens and Seymour were both rendered immobile following one last hit, resulting in a tie for first.

It was decided to do a coin flip for the top trophy, which Ahrens won.