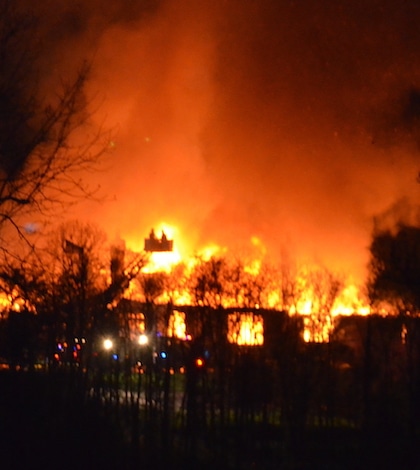 An early Thursday morning fire destroyed a large residence at 7151 Summit View Drive off Mule Road near Columbia and a woman who was trapped in the home died.

The Columbia Fire Department responded shortly after 3 a.m. with assistance from Columbia police, Columbia EMS and the St. Clair County Sheriff’s Department. Other responding fire departments throughout the morning were Dupo, Millstadt, Waterloo, Valmeyer, Prairie du Pont, Camp Jackson, Villa Hills, Smithton and Freeburg, with O’Fallon standing by at the Columbia fire station and Cahokia on standby at its own engine house.

The fire was reported as a thunderstorm with heavy lightning was rolling through the region.

“Information from the insurance investigators has proven that two direct lightning strikes to the residence and a third one 100 feet away was the cause of the fire,” Roediger said. “These lightning strikes occurred 16 minutes before the fire, EMS and police departments were notified.”

One of the direct strikes possibly ruptured a gas line that fueled the fire, Roediger added.

A woman who was the only occupant of the 12,000-square-foot, two-story home at the time of the fire called 911 to say she was trapped in a second floor bedroom, Broshears confirmed.

“All of the sudden, the (phone) line was still open and she never came back on,” Broshears said.

Broshears and Roediger said firefighters first attempted to enter the area of the residence the woman was calling from. Firemen made entry through a second floor window using a ladder truck and were able to advance about 15 feet into the residence before heavy flames pushed them out.

“The heat was just too intense. The house was completely engulfed within minutes,” Broshears said.

The woman was eventually found deceased inside the home, Broshears said, after which the St. Clair County coroner’s office was contacted. St. Clair County Coroner Calvin Dye Sr. identified the deceased as 86-year-old Carol Saylor, who resided in a second-floor living space inside the residence.

“After several hours, the fire was extinguished and a body was discovered in the garage area, where the second floor had collapsed,” Capt. Bruce Fleshren of the St. Clair County Sheriff’s Department said.

Saylor was the mother-in-law of the home’s owner, Joe Koppeis, who resided there with his wife, Patricia. Joe and Patricia were vacationing in Florida at the time of the fire.

With the nearest hydrant located past the long private drive away on Mule Road, other fire departments were requested for water, Broshears said.

“We also used water out of their swimming pool,” he said.

Firefighters remained on scene for more than seven hours.

“The Columbia Fire Protection District would like to extend our sincere sympathy to the family of Carol Saylor,” Roediger said. “They would also like to thank all neighboring departments for their help and dedication at the scene.”

Funeral arrangements for Saylor are pending at Braun Family Funeral Home in Columbia.