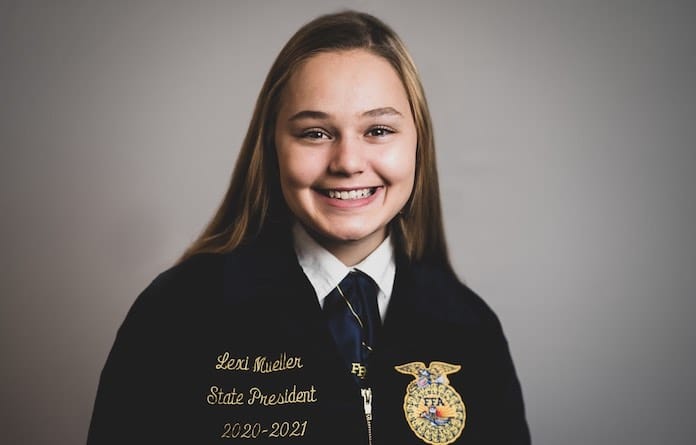 From the very beginning of her term as Illinois FFA president, Valmeyer High School alumna Lexi Mueller sought to make a positive impact.

COVID-19 may have thrown a wrench in the works, but it did not stand in the way of Mueller’s mission.

“When you run for office, you run for the students and you run to make an impact on their lives,” Mueller said. “It’s difficult when you don’t get to see that you’re making an impact face-to-face.”

The now-retired president – whose term spanned from June 10, 2020, to June 11, 2021 – and her fellow state FFA officers spent their terms coming up with creative, pandemic-proof ways to touch members across the state.

At one point, this included spearheading a brand-new conference.

Each year, the National FFA creates the 212 Curriculum and hosts corresponding conferences, but because of COVID-19, these could not occur in-person and would be replaced by a virtual curriculum.

However, Mueller and the other state officers decided their freshmen and sophomore members, known as greenhands, deserved a conference to kick off 2021, so they started one from scratch.

During this new virtual conference, Mueller and her teammates led sessions that focused on leadership traits. They decided to name the conference “Ground Zero,” which Mueller believes adequately captures its essence.

“(Being) in a COVID year, we decided we were really starting out at Ground Zero, and greenhand members are just beginning their FFA careers, so that’s why we named it Ground Zero,” Mueller explained.

There were two sections of the conference held over a span of two weeks. In total, Ground Zero reached a total of 600 greenhands.

Mueller said the conference was the first time she really understood how her work as president during COVID was making a difference in the lives of members.

“Watching 600 kids really get into the content and start chatting in the Zoom chat or trading Snapchats … or really getting along with their group leaders because we split them into small groups a lot so they could get to know each other …  was probably the first time that I actually felt like I was doing anything,” Mueller said.

Eventually, when it came time for the 2021 Illinois FFA State Convention, she saw these connections made in Ground Zero jump off the screen.

Members who had been introduced to each other in the Zoom breakout rooms greeted each other like old friends – even though this was their first time meeting face-to-face.

Mueller said moments like these are why she considers Ground Zero to be her biggest accomplishment as state FFA president.

“My teammates and I created this conference that we didn’t really have to create, but (did because) we felt like we should give back to our members,” Mueller said. “That’s probably what I’m most proud of: the connections I saw being made.”

Mueller described the state convention as “probably the biggest event of the year in an FFA member’s eyes,” and, once again, it was threatened by COVID-19 until Mueller and her team found a creative solution.

Typically, the convention is held indoors at the BOS Center in Springfield and is an overnight trip. The major state officers knew COVID-19 would prevent them from adhering to tradition, so they came up with the idea to host “district conventions.”

Illinois FFA splits the state into five districts, which Mueller and her team used to form three separate conventions. Each convention was held in a local outdoor venue, with three days dedicated to those specific districts and two towards recognizing statewide and national chapter award winners.

“We knew that if we would just propose a traditional convention that it would have gotten shot down and we thought our members deserved an actual shot at being able to be recognized on stage at a statewide event. We really fought the board – (that’s) what I’m going to say on that one.”

Mueller will begin her freshman year of college at Southern Illinois University Carbondale in a few weeks. She plans on majoring in agriculture education with a minor in horticulture.

As an ag teacher, she hopes to facilitate many more “light bulb” moments like those she facilitated with Green Hands.

“One of my favorite things is when you’re doing a workshop and you have this hidden message that you’re getting at and you see it click in one of the member’s minds, that is the best feeling as a facilitator ever,” Mueller gushed.