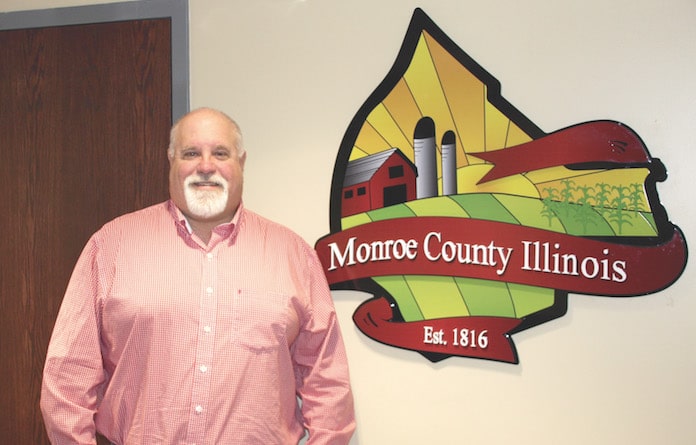 In 1981, the Monroe County assessor’s office was in what Mike Fausz described as “turmoil.”

The assessor at that time was under fire because he was not doing his job well and a vocal group of residents were calling for the entire county to be reassessed properly.

Fausz, who had just graduated high school, did not have a job when it was suggested he take the deputy assessor position.

“They were looking for people, and it so happened my brother-in-law at the time  had worked there and he said ‘we can’t get people hired. Would you be willing to work,’” Fausz remembered. “And I’m like ‘yeah I’ll do it.’ I thought ‘I’ll start off there until I get something else.’”

That never happened, as Fausz has spent the last almost 39 years working for the county.

That will soon end, as Fausz is retiring Feb. 7 after holding four positions in the county over his tenure.

“Hopefully, I’ve made a difference in the county,” the Maeystown resident said. “It’s something I still like to do, but, after all these years, it’s time to go.”

After completing training through the Illinois Department of Revenue, Fausz served as a deputy assessor until 1989.

Around that time, Harrisonville Telephone Company approached the county about switching to 911 for emergency services.

The county board then approached Fausz, who learned how to read legal descriptions, about becoming the 911 coordinator and getting that department started in July 1989.

“It was a new challenge,” Fausz said, “I always like to get different challenges. Being able to start 911 from the ground up, getting the votes passed, getting it approved and then building it, as young kid that was a great challenge.”

Simultaneously, the county asked Fausz to head up its new mapping and platting department, so Fausz had a fellow county employee teach him to draw maps and other necessary skills for that job.

“I love drawing maps,” Fausz said. “Two of my favorite things in school were drafting and mathematics, and they both come into play in the mapping industry.”

Fausz still holds those titles today, and he got his final one in December 1997.

At that time, the county’s zoning department was led by a part-time person, and the county was looking for ways to save money.

So, the county board asked Fausz if he would also like to become zoning administrator.

“I thought if we can save the county some money, I would be more than willing to step in and try it,” Fausz recalled.

In addition to those three paid positions, the governor appointed Fausz to the Bi-State Development Board of Commissioners, which he served on for nine years.

Each of those roles brought something to Fausz’s plate that he enjoyed.

“People-wise, I liked the everyday meeting and getting to deal with citizens who come in with questions,” he explained. “The attorneys that I’ve got to know real well through the mapping department, that’s great. Working with 911, making a difference there and maybe saving someone’s life – that’s fulfilling.”

Overall, though, Fausz said the favorite part of his career has been the county’s citizens.

“I like when somebody comes in and has a question or problem if I can work through it with them,” he said. “Not always do we get a result they’re going to want, but I’ll do what I can.”

Although he still enjoys that, Fausz said there were a  few reasons why he plans to retire, but they all stem from one reason.

“I went through some cancer treatment about three years ago, and that kind of changes your perspective,” he said. “I want to enjoy what I can because you never know when something’s going to come back.”

Fausz said he plans to enjoy traveling with his wife, who recently accepted a new job with travel possibilities. He will also work around his house.

Anyone who wants to wish Fausz a happy retirement can do so at his retirement party on Feb. 7 from 2-4 p.m. in West Meeting Room 200 of the Monroe County Courthouse.

Fausz has mixed feelings about his last day.

“I’m kind of excited, but still kind of nervous,” he said. “I’ve got stuff to wrap up yet, and I’m hoping I have time to get it all done.”

If he does not, that will be a job for Fausz’s successor.

Fausz said the county may be ready to announce those individuals – because there will be multiple people for Fausz’s three jobs – as early as next week.