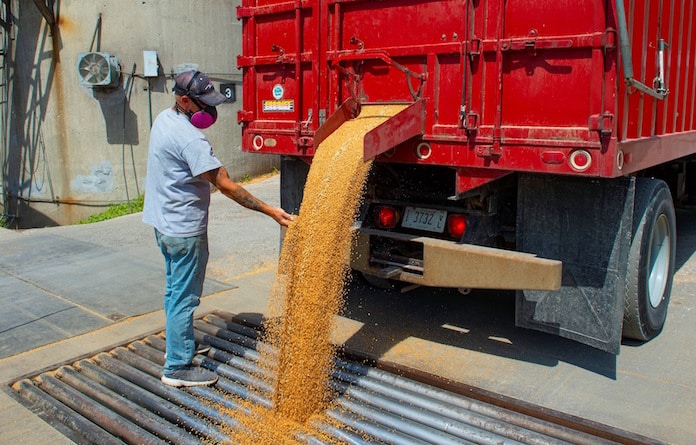 Throughout Monroe County, it has been difficult to miss the scurrying work of farmers in giant machines as they rush to finish harvesting winter wheat.

Winter wheat was planted last October and then wintered in place. It emerged within days and then wintered, sometimes under snow, until it resumed its growth and transition to maturity and readiness for harvest the past two weeks.

“The wet and cool weather in May slowed the wheat crop’s development and then its readiness to harvest,” he said.

Parker said prices of grain delivered at Gateway FS elevators had dipped slightly under $5 a bushel – to $4.90 as of Tuesday – but that is still a respectable price.  Parker also said there was acreage in the bottoms adjacent to the Mississippi River that was not planted for a second consecutive year.

“That river has been up and down, but it has remained high since 2019 and substantial field acreage has just never dried out adequately down there,” he said.

Yields are good, in the 70 bushels per acre range, Parker said.

“And test weights are running about 60 pounds per bushel – quite good,” he added.

The test weight figure is a measure of quality and factors in both the size of each individual kernel and moisture content.

Dale Haudrich of Hecker, who farms for others as well as on his own land, said Monday he had finished combining wheat for the year.

“I was really satisfied with the yield – in the mid-70s and as high as 80 bushels an acre on Route 3 between Waterloo and Red Bud,” he said.

Haudrich said a lot more was going on than just bringing in wheat. Straw is being gathered for numerous uses and second crop beans are in or being planted now.

Kenny Hartman of Waterloo said he finished harvesting wheat last Friday.  He said it took awhile for the wheat to dry properly with the rain the area had experienced.

But he said,  “We had some really good yields and other lesser ones.  All in all, it was pretty good – an average year for wheat.”

And, he added, “second crop beans are developing very well with the rain we have had recently.”

Farmers are seeing small amounts of what is called vomitoxin, or deoxynivalenol, which comes from a disease called fusarium head blight, or scab, on wheat kernels.

Vomitoxin can reduce the value of harvested grain if its presence is high enough to prevent wheat from being used to make flour for human food or feed for animals. The base disease occurs when there’s excessive wet weather during the flowering and grain kernel filling stages of plant development. It is countered by aerial or ground spraying at the time it may be forming on the developing kernels.

“We are able to buy this grain, but its limited use means we have to offer a lower price,” Parker acknowledged.

Illinois, once the nation’s leading producer of wheat, ranks 12th today. Some 80 percent of the state’s wheat crop, valued at more than $180 million annually, grows in downstate Illinois.

The wheat harvest in this region will be followed quickly in most fields with planting of a second crop, soybeans, which are one of the three main crops seen every year across Monroe County.

Corn, which is now being seen growing rapidly, is responding well to recent rain and heat and is next up on the harvest calendar.