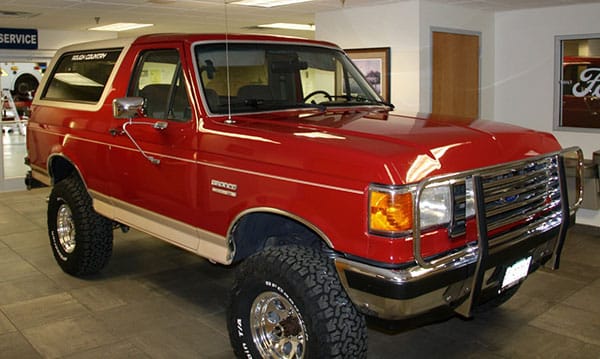 When the Walsh family walked into Mertz Ford in Millstadt on Saturday, they were greeted by the cheers of about 100 people.

It was Triston Walsh’s 16th birthday, and his mother, Julie, told him they had stopped at the dealership for him to test drive a car.

After owner Don Mertz and Julie gave speeches and the National Anthem played, an engine roared to life behind a wall of brown paper with signs reading “under construction” taped to it.

A 1990 Ford Bronco emerged through the wall, shocking an already teary-eyed Triston and his younger brother, Tanner.

The old SUV looked immaculate, its red paint reflecting the lights of the Mertz showroom.

The car had belonged to the boys’ father, Sgt. Nicholas Walsh, who was killed by a sniper in Fallujah, Iraq on May 26, 2007.

The 27-year-old was a Marine serving in the 1st Reconnaissance Battalion, 1st Marine Division. It was his second tour in Iraq.

Triston could hardly process what he was seeing.

“I was just so overwhelmed, so surprised and so happy,” he said.