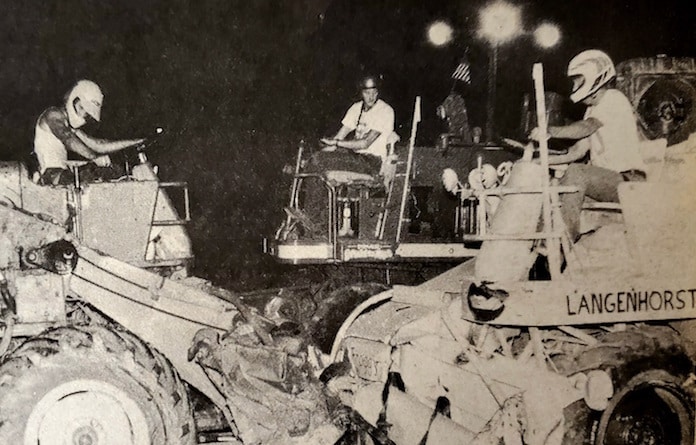 Editor’s note: This is the second entry of our three-part series looking back through the history of the Monroe County Fair, which was canceled this year due to the COVID-19 pandemic.

After the fan-favorite Figure 8 Race debuted at its 25th anniversary fair the year before, the Monroe County Fair of 1973 faced a little more adversity when the end of the fair was delayed a day due to rain.

“A three-inch rain on Thursday afternoon soaked the track to such a degree that tractors worked for hours scraping mud and packing the wet ground in order to hold the tractor pull,” the Waterloo Times reported that August. “With the first round about to begin, another shower sent fans scurrying for cover. The grandstand never did fill up again, but the tractor pull was held and the 4-H steer sale was moved under a tent.”

Additionally, a gas-fired driving device had to be used to dry off the track for the demolition derby, which was pushed from Sunday night to Monday night.

Leroy Washausen of Waterloo won the Figure 8 Race, and Ken Reinhold won the demo derby in car No. 69.

Those two events drew the biggest crowds of the fair, but another person set a record.

Gary Kohler sold his grand champion steer for the highest price in fair history, as the 1,135-pound animal went for 80 cents per pound.

Even with the bad weather, the event was considered a success.

Three years later, Washausen was in the running again, as he placed second in the demo derby. Ralph Schnellbecher of Valmeyer won that year.

That fair also saw the highest livestock entries ever, with the Waterloo Republican reporting over 500 animals including 56 beef cows, 50 dairy cows, 190 swine, 40 sheep, 140 rabbits and 68 horses were judged.

The 30th anniversary of the fair saw about 40,000 people attend the six-day event, which was among the most popular fairs ever.

By 1980, the fair continued drawing around that many people each year. But attendance went down that year, which Monroe County Fair Association Secretary Lyle Wessel attributed to particularly hot weather during fair week.

He told the Republic-Times that fairgoers complained about being charged admission to the grounds instead of the grandstand, as some said they would pay to enter to see the demo derby but not find a seat. Wessel said some people were just upset with the available seating.

No refunds were given because it would be impossible to know if people were telling the truth about the seating. Plus, Wessel reasoned that for $8 the season pass was still a bargain.

“I think that’s a pretty good deal,” he said at the time.

By 1982, the fair had to reverse course and give out over $10,000 worth of refunds in one of the most notorious fairs in history.

The same year the fair expanded to seven days, it was marred by demo derby drivers refusing to drive in protest after seven participants were arrested for driving their derby vehicles on the highway.

That forced the event’s cancelation, which was the first time the fair did not include a demo derby since 1972.

Monroe County Sheriff’s Department deputies Bruce Siddle and Kenneth Glaenzer gave warnings to demo derby drivers for violations including no windshield, brake lights, tail lights and license plates and having slick tires. They also gave six citations for the drivers not having their vehicles registered.

“Along with no registration, I would say the better part are not insured,” Glaenzer told the Republic-Times.

The sheriff at the time, Milton “Pat” Brueggeman, said he was upset by his deputies issuing those citations.

“I regret what happened at the Monroe County Fair last Saturday,” Brueggeman said after the event. “It was something I didn’t know anything about until after all the tickets were written. We worked with the fair board 100 percent and we have always worked with them because this is our county.”

Monroe County Fair Board President Walter Wetzel Jr. said the board offered to pay the $50 for bond for the drivers who were arrested and arrange for them to have a lawyer.

Some agreed, but Wetzel said some “wouldn’t go along with anything short of getting their tickets torn up.”

Wetzel said the fair board would have told drivers to tow their vehicles to the fairgrounds, but it did not know they could receive tickets because none had been written in the derby’s history.

The fracas got to the point that some demo derby drivers threatened others who wanted to still participate in the event. Fairgoers reported one driver even making threats over the public address system at the fair.

Due to the threats and furious crowd, the fair board decided to cancel the race in an effort to avoid injuries and property damage.

“We felt that in order to keep everything safe, we needed to clear the grounds,” Wetzel told the Republic-Times in 1982.

Some people didn’t want their $3.50 refund when it was offered, but others scammed the system.

Wetzel reported some people getting refunds even though they arrived before noon when there was no charge, some people climbing the fence to avoid paying admission and still receiving a refund and others sneaking back into the fair multiple times to get repeat refunds.

After that fiasco, the fair board replaced the demolition derby with mud wrestling the next year. But attendance at most events was down somewhat in 1983, as were livestock entries.

Those numbers went up again the next year, however, thanks in part to two new events. The 1984 Monroe County Fair held the inaugural Little Miss Monroe County pageant, which Nicole Foster won. It was also the first of a few years the fair hosted a combine demolition derby.

“Because of the cost of staging the event, the fair association has decided not to include it in this year’s season ticket price in order that those who do not care to attend the event would not have to pay for it,” the Republic-Times wrote.

That reduced season tickets to $7 each, while admission to the combine demo derby alone cost $6.

The event drew decent crowds and led the paper at the time to write at the end of the fair that “the battered remains of the combine demolition derby have been hauled off.”

By 1987, and the fair’s 40th anniversary, season passes had gone up to $12 each. Heat lessened attendance at that year’s fair, which saw David Wright and Gerald Meyer tie for first in the combine derby.

That event had become a crowd favorite by 1989, when 12 combines entered the derby. Along with carnival armband night, which began the year before, it drew quite a crowd.

Two years later, the combine demo derby was the scene of one of two problems at the fair, as a wire burned off a transformer near one of the restrooms during the event and knocked out power to about half the fairgrounds.

Thunderstorms Saturday afternoon also briefly decreased attendance at the fair, though it was still strong.

“Crowds are getting bigger and better, and we’re having more and more activities,” Monroe County Fair Board Secretary Ron Mueller said at the time, noting the grandstands were filled to capacity five out of seven nights.

Scott Kohler of Waterloo won the demo derby that year, and Dale Gummersheimer of Columbia won the combine demo derby.

Six years later, the fair celebrated its 50th anniversary by making “some changes, (adding) some color and (increasing) prize money,” Sandy Riebeling wrote for the Republic-Times.

That year, fair entrants did not have to pay any entry fees unless their livestock won. That was one of several measures taken to boost youth attendance.

“We like to get the young kinds involved,” Monroe County Fair Association Secretary George Obernagel said. “They have a lot of fun and their participation helps to keep the fair going for the future.”

The fair also held a drawing for 50 attendance prizes donated by businesses, organizations and individuals to celebrate its anniversary.

Those concluded with a fireworks show sponsored by Harrisonville Telephone Company.

To read more about the fair’s history, see the special “Memories of the Fair” booklet in this week’s paper.