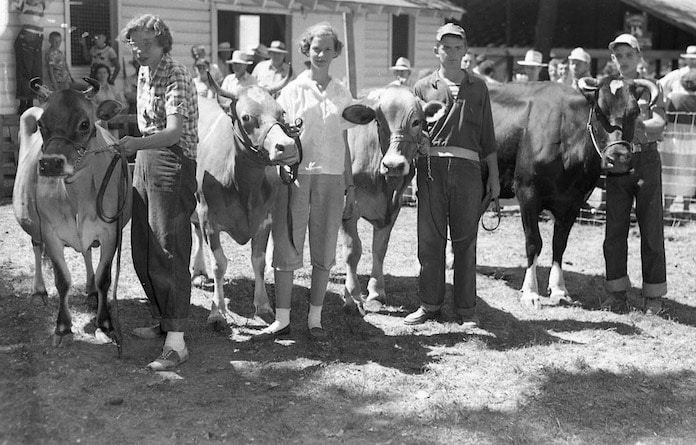 (Editor’s note: This is the first of a three-part series looking back through the history of the Monroe County Fair in lieu of the event being canceled this year due to COVID-19)

Monroe County residents and friends far and wide anticipated beginning to enjoy the 73rd annual Monroe County Fair this coming Sunday, but the coronavirus pandemic forced the fair association to cancel the event that is the highlight of the summer for many.

To help remind readers of happier times at the fair, the Republic-Times is writing a three-part history of the event that should provide fond memories and forgotten information.

“This is your fair,” the Waterloo Times wrote ahead of the inaugural event. “It was organized to provide exhibition facilities with cash premiums to encourage the production and showing of better livestock and crops in Monroe County. Your interest, co-operation and suggestions can make it a worthwhile undertaking.”

There was no admission charge at the first fair, as all proceeds came from donations.

Livestock judging occurred both days and nearly all dealers in Monroe County exhibited their large machinery. The livestock judge was William Brown, a farm adviser from Greene County.

All events happened during the day.

Those men helped create an event whose success ensured the fair would continue.

“The event exceeded all expectations of the fair officials,” the Waterloo Times wrote in 1948. “Large crowds were on hand both days, and the judging proved very interesting to many who had never witnessed this before.”

The fair proved so popular that the permanent building constructed at Pautler Park was not large enough to house the livestock entries, forcing individuals to use tents and outside pens.

Even with that immediate success, there was room for improvement.

“Probably the only disappointing part of the fair was the few exhibits in the departments of domestic arts, floriculture and culinary arts,” the Waterloo Times reported. “However, the quality of the exhibits was high and it is believed that next year’s fair will bring out more and even better exhibits in these departments.”

Over the next few years, the event grew to the point that, in 1953, a half-day was added “to provide more time for livestock judging and an expanded program of entertainment,” according to the Waterloo Republican at the time.

That year saw 6-year-old Shirley Glaenzer become the youngest person ever to win grand champion. She won in the junior dairy female show.

Six fairs later, a still-popular entertainment option was added in the Monroe County Fair Queen Pageant. That first pageant came after the state announced it would have a similar contest in January 1960.

A committee of fair association members developed rules for the “Miss Monroe County Fair contest,” that contestants must live in the county, be single, unmarried and between the ages of 15-21 and that professional models were ineligible.

“Judging will be based on beauty, personality and poise,” the rules stated.

Barbara Andres of Valmeyer won the inaugural contest, which took place the year the fair drew its biggest crowds yet despite what may have been the first rainy night.

That same year, it also moved to a recently purchased 20-acre tract of land originally owned by the Kerber family. Located a half-mile west of Waterloo on Route 156, that became the new fairgrounds.

“Some people said it couldn’t be done when the Monroe County Fair Association announced that the 1965 fair would be held on the newly acquired fairgrounds, but through outstanding effort put forth by more than 100 volunteer workers, the fairgrounds is ready for its first fair,” the Waterloo Times wrote just before the fair began.

Volunteers helped move three buildings from Pautler Park to the new fairgrounds for the event.

Those buildings housed the highest ever livestock entries at the fair, as over 100 sheep, 300 hogs, 50 dairy cattle and around 50 beef cattle were entered.

Five years later, the most popular event at recent county fairs debuted: the auto demolition derby. Fifty years ago, it was already the biggest draw.

The 23rd fair also had two events of “unusual interest” on Sunday that brought enormous crowds but no longer appear at contemporary fairs.

Those events were Swamp Buggy Polo or Swamp Soccer, which drew the second largest crowd of the week, and a mortgage burning. The former involves drivers using vehicles that traverse swampy terrain to play a game similar to water polo and soccer, while the latter was a 20th century American tradition of burning a mortgage after it was paid off.

In this case, the mortgage that was burned was that for the fairgrounds.

After those successes, the fair moved to six days for the first time yet, with the event running Sunday through Saturday the week of Aug. 10.

“Several changes as well as new innovations and features are on the schedule this year,” the Times wrote in 1971. “A building has been provided for exhibition purposes and will be an improvement over the tents of past years. Additional seats — 250 of them — have been added to the grandstand. A carnival with 11 big exciting rides will be on the grounds throughout the entire fair.”

For its 25th anniversary in 1972, the fair added another event that has become a mainstay: the Figure 8 Derby Race.

Only Monroe County drivers were permitted in that first race.

While the Waterloo Republican reported the demolition derby drew “an overflow crowd” and was the most popular event at the fair, the Figure 8 races also filled the bleachers. Clyde Matthews of Waterloo won both events.

For more pictures from past fairs available for purchase as print or download, including those from the Bob Voris archives, click here.