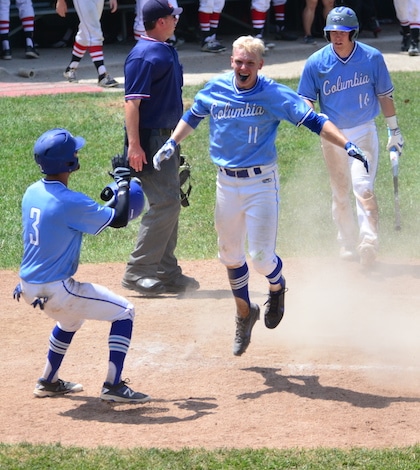 In a bizarre Class 3A baseball regional final, Columbia walked it off twice to win 5-4 at Highland in extra innings.

The Eagles looked well on their way to a 26th straight victory early on, building a 3-0 lead as Brennen van Breusegen came through with an RBI hit in the second inning and Columbia added another run in the fifth.

But Highland rallied in the sixth inning, mixing in clutch hits with rare defensive miscues by the Eagles to grab a 4-3 lead. The Bulldogs nearly added another run in the seventh, but a runner was thrown out at the plate by Columbia senior outfielder Jordan Holmes.

After Mitch Daniels tied the game with an RBI single in the bottom of the seventh, van Breusegen seemingly won it for Columbia with a single to right. However, baserunner Kyle Steve failed to advance from first to second base during the team’s celebration, resulting in the winning run being nullified. For a video of the play, click here.

In the eighth inning, Steve shut down the Bulldogs on the mound and Columbia had a chance at redemption. Just as they have all spring, the Eagles emerged victorious. Shane Wilhelm scored on a wild pitch to give the Eagles the win and a regional championship. For a video of the winning run, click here.

Columbia (28-3) will face Mt. Vernon in the Centralia Sectional at 4 p.m. Wednesday.

“It’s been a fun season. Today was pretty typical of us: staying with it, taking good at bats, and getting ourselves a chance to win at the end,” O’Donnell said.