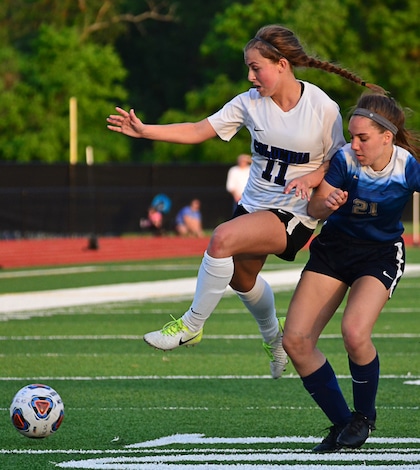 Jackson was credited with a goal and an assist and Reagan Mauch recorded the other goal for the Eagles (24-2-1), who advance to the Class 1A Columbia Supersectional on Tuesday night.

The motto for the Eagles this spring was “Unfinished Business” after falling 1-0 late in overtime to Althoff at home in the sectional championship game a year ago.

“Losing to this team with three seconds left, a game that I’ve never in my life been a part of that kind of emotion to lose like that; our players know what it felt like,” Columbia head coach Jamey Bridges said. “A year ago, May 18, 2018. We marked it. We have a picture in the locker room of (Althoff’s) Julia O’Neill celebrating and (Columbia’s) Chloe (Graff) on the ground. So obviously, all that emotion and all of that we felt like was unfinished.”

Friday’s game in Belleville was scoreless at the half in a balanced match from the start. Both goals for the Eagles – the first with 29 minutes remaining and the second with only 36 seconds left – were scored from Jackson throw-ins from the side that resulted in scrums near the Althoff goalkeeper.

The Eagles host St. Teresa out of Decatur at 6 p.m. Tuesday for a berth in next weekend’s IHSA state tournament in Naperville.