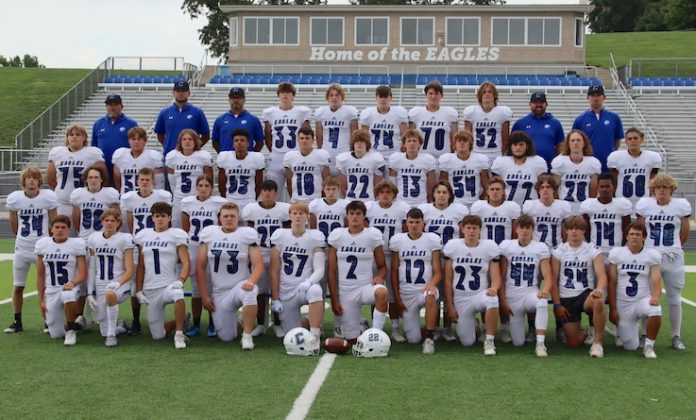 With experience at key positions and a strong overall work ethic, the Columbia High School football squad is primed for another winning campaign in 2022.

A hard-throwing righthander who enjoyed success as a pitcher on the state third place CHS baseball team this past spring, Voegele threw for nearly 900 yards and nine touchdowns and rushed for more than 700 yards and 10 TDs as the starting signal caller for the Eagles in 2021.

Other key returners include senior offensive/defensive linemen Tom Koenigstein and Mason Schnable. Both should provide stability in Columbia’s trenches along with junior Joe Kish and sophomore Anthony Antonas.

Other seniors include wide receiver/defensive back Zack Wetzel and wide receiver/linebacker Brendan Weik. They are joined in the receivers group by junior Sam Denny, who also plays linebacker.

At running back this season for the Eagles will be senior Aidan Gaither and sophomore Hudson Bryant. Also in the backfield rotation are senior Cody Tutor and sophomore Cameron Janik. All four also play linebacker on defense.

Another returning player is junior Brandon Jackson, who plays tight end and linebacker.

A new kicker and punter on the roster this season is sophomore Ava Hrdlicka, although Voegele also has experience with 26 extra points, 44 kickoffs and 33 punts last season.

Longtime Columbia head coach Scott Horner said having a three-year starting quarterback and other returning experience certainly is a strength, while an admitted team weakness this season is a lack of depth.

“As long as we can stay healthy, we should be a very competitive team,” Horner assessed. “Although we don’t have a ton of speed, our kids have worked hard in the offseason and are ready for the season to get going.”

The Eagles open with a tough road test at Mascoutah this Friday, followed by a home game against Monroe County rival Waterloo on Sept. 2.

Read the Fall Sports Preview in the Aug. 24 issue of the Republic-Times.