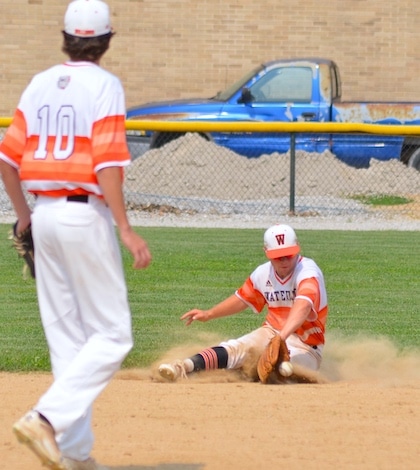 He was just as effective Saturday in the sectional final. In fact, Waterloo pitching in general has been stingy with opposing offenses in surrendering just four total runs.

“You can’t say enough about Drake and our entire pitching staff,” Waterloo head coach Mark Vogel said. “We’re playing the way we have to play. We have to play defense, we have to pitch and then we have to take advantage of opportunities we get offensively. And that’s what we did.”

To Vogel’s point, his Bulldogs scored all three of their runs in the third inning without the benefit of a hit. A leadoff walk was followed by a hit batsman, another walk and then a long sacrifice fly to the rightfield warning track by Ty Kueper to give Waterloo a 1-0 lead. Dustin Crawford lifted a short fly ball to left that was dropped, leading to another run. A second sac fly by Marcus Heusohn made it 3-0.

“We understand who we are and we work every day to make sure we play the game we’re capable of,” Vogel said.

The three-run cushion was plenty enough for Downing, who had pinpoint accuracy with his fastball and kept the Carbondale hitters off balance with a biting slider.

“They could not hit the slider,” Downing said after the game.

Downing induced several ground balls that his infield defense swallowed up for easy outs. The middle infield of Josh Wittenauer at shortstop and Tyson Roedl at second base kept busy and didn’t let their ace down.

“The grass killed it a little bit but, I mean, I’m fine with it,” Downing said.

Downing struck out 10 and walked none, surrendering just four hits all game.

Waterloo (22-12) advances to the supersectional, where it will take on Effingham at 4 p.m. Monday at GCS Ballpark in Sauget.