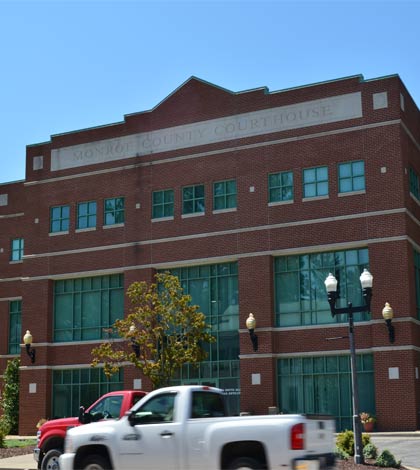 The Monroe County Board of Commissioners shook off arctic weather for the second time in January to meet Tuesday morning, Jan. 21, in public session at the courthouse.

Normally, meetings are conducted on the first and third Mondays, but the session was observed Tuesday in recognition of Martin Luther King Jr. Day on Monday.

Monroe County Highway Engineer Aaron Metzger presented a resolution laying out plans for cooperation between the county and the city of Waterloo to build a sidewalk on Lakeview Drive extending from Route 156 (Park Street) southward to Lakeview Park. Work on the approximately 4,000-foot stretch will include improvements on both sides of Lakeview Drive in the form of curbs and gutters, and a five-foot wide sidewalk on the east side of the road.

The county will perform engineering services and share costs of right-of-way acquisition, new utilities and construction, on a 50-50 basis with the city.  Construction costs for the project are projected at some $800,000, with $470,000 coming from federal funds. The walkway will tie into the existing Lakeview Park walking trail, and the city will have jurisdiction and oversee its maintenance.

Metzger also commented on the county’s work to clear roadways for safe driving following Monday morning’s light snow, complicated by strong winds and cold temperatures. He reported the county’s crews turned out to work early in the morning.

She noted that the organization, which leads 4-H and other related activities in a three-county area comprised of Monroe, St. Clair and Madison counties, has extended its work into previously untapped areas, including robotics. It also administers after-school programs in the counties. Besides serving young people, the extension also sponsors adult community gardens, that in turn serve nutrition needs in the area.  A combination of federal and state funds support the organization, as well as funding from the counties.

Oak Hill Director Kim Keckritz said employee turnover remains a focus there, although she noted they are seeing improvements in turnover over averages in recent years.  She also discussed assuming costs of minor injuries to employees.  Keckritz said that she will monitor results to see if this results in reduced premiums.

County Noxious Weed Commissioner Chris Howell, who also handles leases of bottoms property acquired by the county after the FEMA buyout in 1993, reported that lease fees for the land, comprised of 84 parcels, will increase to reflect comparable amounts for other land.

A resolution was passed appointing Barbara Wagner of Waterloo to the Monroe County Board of Health for a term to expire June 30. Wagner is replacing Dr. Sandra Hodel, who has resigned.

The board also unanimously voted to support countywide observances of the Monroe County Bicentennial throughout the year of 2016.