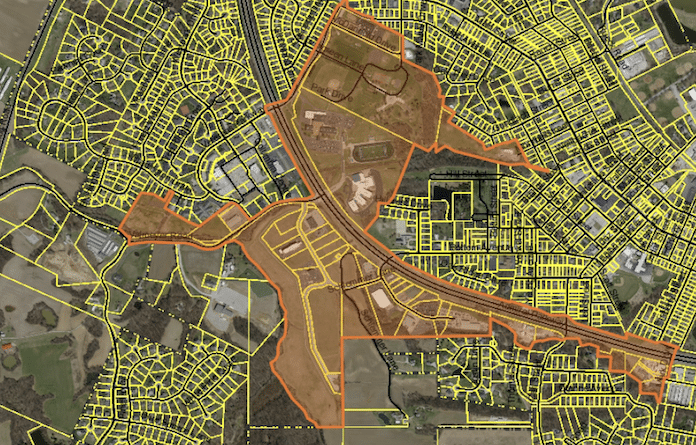 The area west of Route 3 in Columbia between Main Street and Valmeyer Road was once not much more than overgrown woods and a flood plain.

Twenty five years later, thanks in part to a tax increment finance district, it is a hub of commerce in the city.

The Admiral Parkway TIF District, created by an act of the Columbia City Council in 1996, began as a 150-acre project area before an additional 44 acres were added through an amendment in 2005.

The district has led to not only the influx of businesses to the city, but has funded many improvement projects within the TIF boundary. The district’s tax collection expired at the end of 2020.

Columbia Director of Community Development Scott Dunakey provided the Republic-Times with a performance summary of this TIF district through the end of last year.

“The TIF spurred well over $30 million invested into the district, which resulted in increasing the (equalized assessed value) from $113,000 in 1996 to $10.2 million in 2019 and total TIF revenues of over $12.1 million,” Dunakey summarized, pointing out that “final closeout numbers may be adjusted to account for TIF revenues to be collected” in 2021.

In theory, TIF districts work by freezing the taxable value of properties within that district for a set period, usually between 20 and 25 years. The increased tax revenue from development of the properties is reinvested in the TIF district.

Municipalities benefit by generating funds for local projects and creating an increased tax base once the TIF expires. Businesses are encouraged to develop within the district through lower risk and reinvestment of TIF revenue.

In reality, TIF districts have been maligned because of highly-visible districts that become a resident taxpayer burden due to poor oversight or design, misuse of project funds and failed investments that result in major shortfalls in expected tax revenue.

TIF districts have also been denounced as ways for major national retailers to manipulate the tax incentives and undermine the community improvement function of the districts by accepting excessive amounts of TIF.

While arguments against TIF districts are valid, the problematic aspects were not evident in this case.

Over the life of the Admiral Parkway TIF District, the city has attracted quality developments that have dramatically increased the value of the property as well as the tax revenue for the future as the district expires.

The estimated projected EAV increase in 1996 was $4.5 million for the duration of the Admiral Parkway TIF District. As of 2020, the district more than doubled that estimate with an actual current increase in EAV of over $10 million from 1996.

In 1996, total investment estimates into the district were projected at $11 million. Total investments are currently $31.4 million throughout 25 projects with $26 million coming from private investment.

Some of the developments in the district include the world headquarters of engineering consulting firm  MAVERICK Technologies; manufacturing company Budnick Converting; The Falls reception and conference center; as well as businesses such as Hampton Inn, Quality Collision, CVS, Walgreens, Reliance Bank and others deciding to locate businesses within the district.

The willingness of businesses to invest in the Admiral Parkway TIF District allowed Columbia to make improvements in areas within the district that it may not have been possible without TIF funds.

The wetlands project is a 33-acre tract in the center of the district that is not suited for commercial development due to its location in a flood plain. Currently, the area boasts a nature habitat along a walking trail with future amenities planned.

Another common complaint about TIF districts involves the reduced funding area schools receive as a result of tax revenue being earmarked as TIF revenue.

Dunakey said it is “worth noting 12 percent of annual TIF revenues are disbursed to Columbia Unit School District No. 4 under an agreement with the city executed in 1997. This totals over $1 million in revenue for the school district to date.”

Since Columbia School District grounds were intentionally included in this TIF district, project funds were available for use in the construction of the Columbia Middle School building in 2005. Furthermore, TIF monies were also able to finance improvement of the intersection of Valmeyer Road and Route 3 at the main entrance to CMS.

Columbia Ward IV Alderman Mary Ellen Niemietz credits the initial design of this district for its success. While she was not an alderman at the time the TIF district was created, she was elected to office the following year and has seen improvements to the city as a result.

She describes the results as “beneficial to all” and credits city transparency with taxing bodies to create a unified effort “without alienating” any of the involved partied.

Columbia City Attorney Terry Bruckert confirmed that the Admiral Parkway TIF District has been used by the Illinois Municipal League as a “model” of success and an example for local governments considering creating a TIF district.

With final payouts from the Admiral Parkway TIF District moving through the city this year, an area that was once a blank space through town is now a business destination and an established tax base for the future of Columbia.