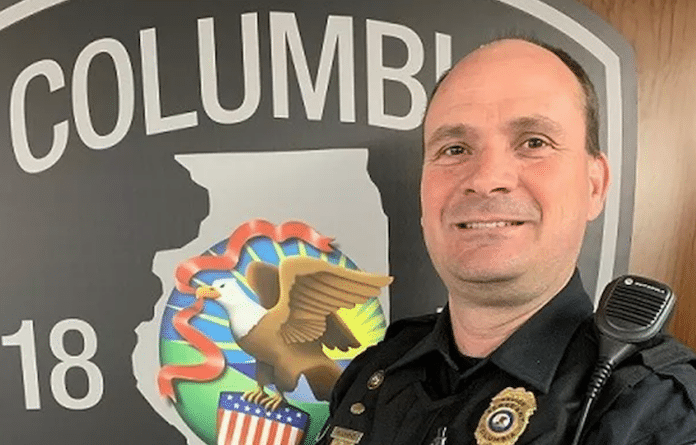 As Columbia Police Officer Mike Conrad told his neighbor after being diagnosed with cancer, “Life has dealt me a bad poker hand and I’m going to fight like heck to get through it.”

Now, with the help of GoFundMe and a long-standing basketball rivalry, the community can show Conrad he does not have to face this battle alone.

At 5:30 p.m. Monday, Nov. 8, the community can gather at Immaculate Conception School to watch eighth grade boys and girls from ICS and Columbia Middle School basketball teams face off. The event will also include a 50/50 raffle, shooting contest and more.

All proceeds will go to Conrad’s medical expenses, his neighbor and event co-organizer Mark Sandstrom said.

“I thought it was the perfect event to pull our community together because both the ICS school community and the CMS school community would be participating in this event … to honor a community member who needs support, and Mr. Conrad needs support,” Sandstrom, CHS head boys basketball coach and longtime teacher, said. “Both of his girls go to ICS and that’s part of the reason why I think it’s the perfect scenario to help support a police officer here in town that is in need of some help.”

This is not the first benefit of this sort, as former CMS teacher Jon Wehrenberg has organized similar events in the past under the name “For the Love of Community.”

While Wehrenberg did not organize this upcoming event, as it is spearheaded by Sandstrom and ICS principal Dave Gregson with help from the Columbia Police Department and Columbia Fire Department, Sandstrom is confident it will be a success.

Columbia Police Chief Jason Donjon said he has repeatedly witnessed the power of the community, and knows it can help his colleague in this cancer fight.

“We’ve seen it time and time again when somebody is hurting or needing help, the community – Monroe County, Columbia, Waterloo, everybody – just rallies around it and understands the big picture,” Donjon said.

Sandstrom organized a GoFundMe for Conrad – whose nickname is “Muscles” – that has already surpassed its goal of $10,000. In the GoFundMe’s description, Sandstrom promotes the Nov. 8 event and introduces Conrad to those who have not met him.

“Caring,” “by-the-book,” “organized,” “committed” and “the ideal community member” are all adjectives Sandstrom said Conrad’s closest coworkers and friends use to describe him.

Donjon, who has worked with Conrad for nearly 18 years, reiterated these attributes.

“We’re all together in this community. Everybody respects the police department, fire department and EMS and it goes back the other way. We respect and appreciate everything the community does,” Donjon said. “Mike is just the epitome of that. He’s born and raised in Columbia. Everything he does is for the betterment of the community. He has a big heart and is a great person and a great officer.”

Conrad had actually been with the Columbia Police Department before Donjon was hired, and was promoted to sergeant shortly after Donjon arrived. Donjon said Conrad helped train him and teach him one of the most important lessons law enforcement officers can learn:

“Treat people how you want to be treated and understand that everybody has a bad day and it doesn’t mean they’re bad people,” Donjon said. “Everybody, including us, has had bad days, so be understanding and considerate to everybody.”

Donjon said the CPD, Columbia EMS and fire department will be hosting mouse races in the spring, complete with auctions, to also help Conrad cover upcoming medical expenses. He said there is not an official date yet, but they are planning on hosting it at Turner Hall.