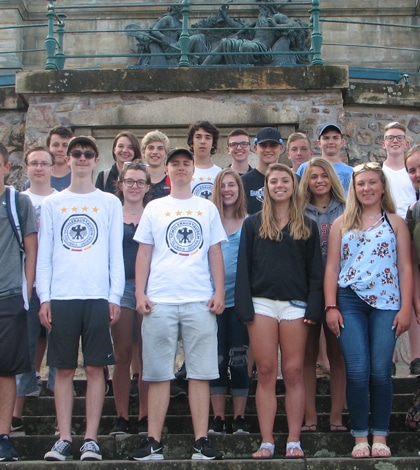 “I have long believed, as many before me, that peaceful relations between nations requires understanding and mutual respect between individuals,” the 34th president said. “If only people together, then so eventually will nations.”

More than 50 years later, that mission lives on in Columbia, as the city is partnered with Gedern, Germany.

As part of that partnership, the cities send students to either place, with Columbia students visiting Gedern in even-numbered years and vice versa in odd-numbered years.

Columbia High School German teacher Taylor Nickerson leads the trips. He has been to Germany three times through the exchange program since he started planning the trips in 2011. He did not go this year, however, because his wife had a baby right before the trip.

Hannah Stewart, a Columbia Middle School teacher, chaperoned the trip instead. She was assisted by Andreas Heuser, who has led the German side of the program since it began in 1993.

Nickerson said one focus of the biannual trip is for Columbia students to spend at least 10 days in a German school.

“Really the focus of the exchange is to experience life as a German teenager and to see what a German teenager experiences daily – getting up, going to school, coming home, eating and hanging out with friends,” Nickerson explained. “It’s not a sightseeing trip. It’s not a bus tour. We’re not staying in hotels and eating in restaurants.”

Another core part of the trip is a presentation the students must give in German about some aspect of life in this area.

Usually they speak to classes at the school they attend, called Gesamtschule Gedern, but near the end of the trip they speak to the hundreds of members of the Gedern Sister Cities chapter.

It is not all work for the students, though, as they have weekends free and do regional sightseeing trips.

On the latest expedition, students visited a castle called Marksburg, took a Rhine River cruise tour, explored a working salt mine called Merkers and went to Frankfurt, among other activities.

CHS student Amanda Koenigstein said one of her favorite parts of the trip was the Franktfurt excursion.

“Just being able to explore their churches and many stores throughout the city really engulfed you in the culture,” she said.

“For example, our group got to see the only standing Cathedral in Frankfurt after the World War II bombings. Additionally, their shops were very different from our malls we have here in the states because their ‘malls’ are very spread out and have far more choices than our malls do.”

“My favorite part of the trip was the German culture that I got to be immersed in during the three weeks,” said Crossley, now a junior. “Their culture reflected many aspects of ours. However, it was different enough to be its own. The food, media and love of soccer showed me a new perspective that I wouldn’t have found in Columbia.”

“Traveling all the way to Germany really taught me that I need to expand out of this bubble I live in,” Koenigstein, a junior. “And agreed I’m not sure that I would have realized that if I didn’t go on this trip.”

Nickerson said that new perspective is one of the main benefits the program has provided throughout its 25 years.

“Establishing those relationships and connections with people in other countries is invaluable,” he said. “Sometimes, it can totally change your perspective on the world.”

Nickerson also pointed out the language learning value and the relationships students form as other benefits.

“The relationships these kids establish with other students are just amazing,” he said. “It’s so cool to see when these kids show up and they’re sort of awkward. You can tell they’re getting to know each other. But three weeks later we’re leaving to come home and these kids are literally hugging each other and crying and don’t want to let each other go. It’s like they’ve become best friends.”

Looking back, both Koenigstein and Crossley said the experience was well worth it.

“Overall the trip as a whole was an amazing experience that enriched my world view and brought me new ideas that I hadn’t discovered,” Crossley said.

“Because I was away from my family for the first time, it kind of forced me to come out of my shell and really submerge myself in the German culture,” Koenigstein added. “Being able to explore a country and just absorb what you see and experience is really incredible and I thoroughly enjoyed my time in the amazing country that is Germany. Lastly, being able to see where my ancestors came from and also being able to see my relatives still living in Germany made the whole trip a surreal experience.”

Adults will also have the chance for that experience, as they also can travel to Gedern as part of the program.

For more information, visit ColumbiaSisterCities.com or call Ingrid Soraghan at 281-7864.