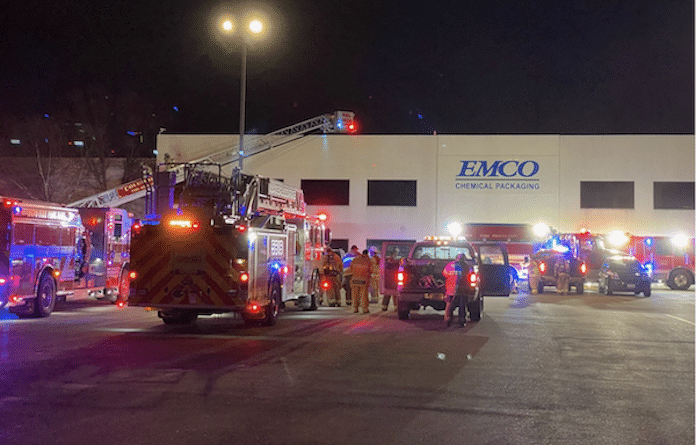 Per a fire official, a 55-gallon drum of divinylbenzene reacted violently with alcohol being used to clean the drum, blowing the lid off the drum and splattering the chemical on the floor and wall of a room inside the plant. Employees used dry chemical extinguishers and Columbia firefighters sprayed water on the drum initially before St. Clair County Emergency Services advised to let the reaction settle.

All employees of the two-story structure safely evacuated, per a fire official. There were several employees inside at the time of the incident.

Dupo and Millstadt firefighters closely monitored the drum, making several trips into the “hot zone” and using materials provided by EMCO to absorb and contain any chemicals that spilled.

Columbia Fire Chief Mike Roediger said St. Clair County Emergency Services has chemists as part of its unit and had someone on scene within 10-15 minutes to advise how best to handle the situation.

“They were also on the phone with EMCO chemists right away,” Roediger said.

The chemical reaction occurred in an enclosed room at the plant which contains a ventilation system that scrubs the air, Roediger said.

“That system was doing what it was supposed to do,” he said.

Assisting the Columbia, Dupo and Millstadt fire departments and St. Clair County Emergency Services at the scene included the Cahokia, Waterloo and Mehlville fire departments, Monroe County Emergency Management Agency, Columbia Police Department and Columbia EMS. The Freeburg Fire Department stood by at Columbia’s station in case another call came out. The Fairview Heights Fire Department also responded for use of its large ventilation system, but was not needed.

The mutual aid companies were released by about 11 p.m., with Columbia clearing the scene at 11:30 p.m. EMCO personnel monitored the affected area overnight.

“There were a few tense moments, but it all turned out for the best,” Roediger said.

EMCO Chemical Distributors is one of the leading providers of chemicals and chemical related products and services in North America.