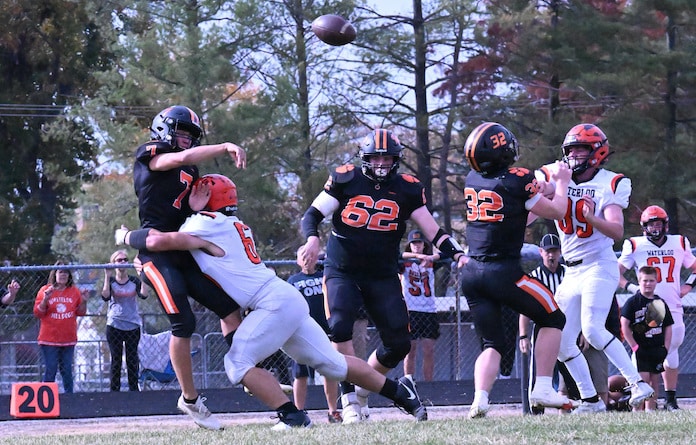 The Waterloo High School football program finally got the monkey off its back, winning a playoff game for the first time since 1994.

They did it in impressive fashion, turning early turnovers into points and then running all over host Richland County, 76-28, in a first round IHSA Class 4A playoff game Saturday afternoon in Olney.

“It felt really good,” Rose said of the milestone. “I didn’t have any idea until a coach told me, but it’s special.”

Richland County finally settled in at that point and orchestrated a 66-yard scoring drive that was capped off by a passing TD.

Keyed by a 40-yard run early in the drive, Waterloo’s Evan Davis continued his record-breaking season with a five-yard TD run to give Waterloo an early 21-7 lead.

Richland County focused on its air attack and connected on a 56-yard pass play to climb back into the game at 21-14.

Back and forth the teams went, as Davis caught a short pass from senior Waterloo quarterback Aidan Morrow and scored to make it a 28-14 lead for the ‘Dogs with 8:45 still left in the first half.

Richland County fumbled the ensuing kickoff and Waterloo recovered, and that led to Osterhage scoring on a pass play to make it 35-14.

Desperate to stay close in this do-or-die game, Richland County drove all the way to Waterloo’s five yard line but turned it over on downs. Davis took it from there, busting loose for a 77-yard run before being brought down illegally by a horsecollar tackle. After the penalty yardage was assessed, Davis then ran it in from 10 yards out to give Waterloo a 42-14 edge late in the first half.

Richland County answered with a long TD pass, but Davis countered with yet another rushing score behind his powerful offensive line to make it 48-21.

Richland County quickly answered again, and then with four minutes left before halftime, Waterloo’s Bryce Reese got into the act with a 50-yard TD run. The score was 55-28 at halftime.

Waterloo received the opening kickoff of the second half, and Osterhage got the scoring going once again with an 11-yard TD run to put the ‘Dogs up 62-28 early in the third quarter.

Waterloo got the ball again and Morrow joined the TD party via a three-yard run to give the Bulldogs a 69-28 lead with six minutes left in the third quarter. This put the game under a running clock due to there being a 40-point advantage for Waterloo.

Another possession for the Bulldogs featured more running from Davis before he was taken out with the huge lead, but not before he finished with 317 yards on 23 carries. He rushed for 300 yards in a Sept. 9 win over Carbondale.

Capping off this drive was the head coach’s son, Brady Rose, with a rushing TD for a 76-28 lead.

That was the end of the scoring on this day, and Waterloo improved to 7-3 on the season.

In all, Waterloo rushed for 519 yards in the game.

“The level of football that we are exposed to, (Richland County) probably haven’t faced this season,” Rose said.

Waterloo fans will be treated to a home playoff game – the first ever on its turf athletic field – this Saturday at 5 p.m., as the Bulldogs play host to Springfield Sacred Heart-Griffin.