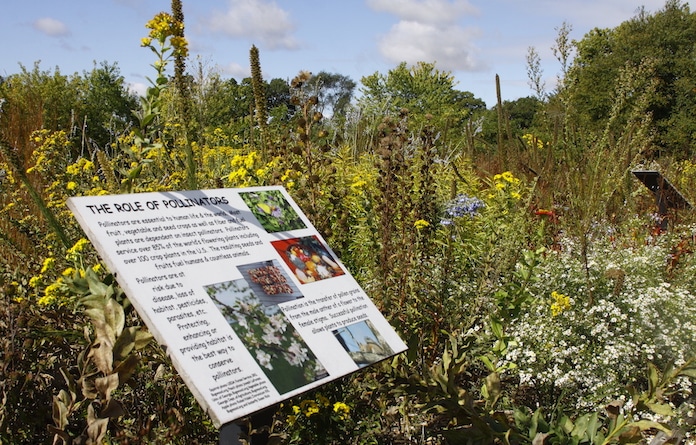 What began as a vision six years ago has come into focus with sights on the future at the Baebler Educational Farm.

The 103-acre property at 4022 JJ Road south of Waterloo was donated to the Monroe County U of I Extension & 4-H Education Foundation by the late Vera Baebler in 2014 with the goal of keeping the land in its natural state and it being used as a destination to experience nature while also learning about it.

Vera’s vision was to give the community an opportunity to experience the setting of the farm where she and her husband watched birds, hiked trails and fished ponds.

She wanted to create “a place where the youth of Monroe County could enjoy nature,” said Susan Rick, Baebler Educational Farm coordinator.

With nearly 4,000 hours of volunteer labor, the property has become more accessible to everyone since its founding six years ago.

“A lot of work went toward cleaning up and repairs” to the farm, according to Rick, with clearing invasive honeysuckle plants being a major accomplishment to improve access to all the land has to offer.

“It used to take me half an hour to cross” from near one of the ponds to the wooded area behind it because of growth, Rick said. To walk across the same area now takes about 10 seconds and leads to one of the several woodland trails on the farm.

Along with work by Rick and Master Naturalist Mike McClymont, contributions from local FFA chapters, 4-H clubs, Boy Scouts and individuals and donations from civic organizations have made the farm a place where everyone can appreciate the natural setting comfortably.

In recent years, volunteers and groups have worked to create nearly two miles of woodland trails with bridges, installed benches, a pavilion, fishing docks, fire pits, various bird habitats and a recently opened pontoon bridge across one of the farm’s four fishable ponds.

There have also been four Eagle Scout projects completed at the farm to create trails and improve the grounds by adding the kiosk at the entrance and benches and covered picnic tables near the ponds.

The labor paid dividends this year especially during the recent Butterfly Festival self-guided tours from mid-August through the end of September.

Along with a springtime event, the Butterfly Festival is another major community event at the farm. Rick felt the maps with locations of interest allowed visitors to see more of the farm than they may have in the past when butterfly presentations were held mostly in the area of the farm’s pollinator habitat.

“The Butterfly Festival in 2020 brought in a lot of people,” Rick said, noting numbers may have been up due to other options being closed by COVID-19 restrictions, allowing more people to discover all there is to do at the farm.

While butterflies, bird watching, fishing and hiking provide activity options, education is foremost at the farm.

At the entrance to the property, there is a classroom with reference materials about the farm. The room is used for educational demonstrations for local 4-H clubs and other groups.

Behind the classroom is a research plot that was installed by Nathan Johanning, University of Illinois Extension commercial agriculture educator. The plot features rows of tomatoes and peppers used to gain information about production methods.

Alongside the building are bee hives from The Picky Bee, a Waterloo business, used for conservation, production and education purposes.

Last week, Covercrest,  a company that specializes in “producing a low carbon intensity crop on unused land over winter,” utilized the recently harvested corn fields on the property to experiment with a cover crop that has the potential to be used as a feed, fuel and food oil crop.

In addition to research being conducted on the farm, its development over the past six years made it a study in conservation and land use in itself. Signs placed throughout the farm explain the purpose of various animal habitats and natural vegetation areas.

The foundation has worked with Illinois Department of Natural Resources biologists to develop forestry, wildlife and fishery plans. It also partnered with the USDA Conservation Reserve Program to plant native grasses and trees at the farm and used the Illinois Recreational Access Program for work on areas of the farm and to help establish youth hunting programs on the grounds.

Baebler Educational Farm is essentially “self sustained” through volunteer efforts and grant money, according to Rick, adding that any produce grown at the farm is donated to local food pantries.

Money to repair all roads on the property, improve pond drainage, install pollinator habitats and other amenities as well as for projects to clear areas and promote trail usage came in the form of $86,000 in grants.

The Illinois Clean Energy Community Foundation has been a “major contributor” to farm efforts, Rick said, naming the Oerter Foundation as another source of funds and thanking local clubs such as the Lions and Optimists and Clifftop for volunteer work and donations.

Rick also noted that Monroe County U of I Extension & 4-H Education Foundation president Don Schrader takes care of farmable areas of the property at his own expense.

“It’s a community effort,” Rick said, emphasizing that everyone is welcome to enjoy the farm and she is “happy that more and more people are finding it.”

As the farm has been developed, it has become a center for U of I Extension and 4-H recreation activities and classes such as shooting sports at an area on the east end of the property and Junior Naturalist and Junior Master Gardner training throughout the farm. It has also become a popular fishing spot for Camp Wartburg visitors.

Work is not complete at Baebler, though. Future plans include construction of more fishing docks and work to improve the easternmost pond. A concrete slab was placed near the pond as the future home of a pergola donated by Trost Plastics.

A fifth Eagle Scout project is also in the works that involves creating an exercise trail featuring 10 exercise stations, two at five separate locations, along a trail.

With the farm becoming more popular, a committee is forming to plan for the future of the educational farm.

Rick said the committee will consider what future amenities would benefit the farm and what needs to be avoided to keep the farm in line with Vera’s intentions. Further, the committee will determine what liabilities should be considered with an increase in use and if plans should to be implemented for perpetuity.

With a solid foundation for the farm and plans for continued use and future projects, Rick said that in all the work throughout the past six years, “what has been most rewarding is watching it develop.”

Baebler Educational Farm is open to the public from dusk until dawn seven days a week.