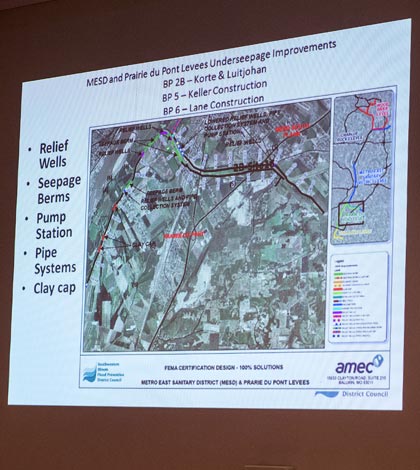 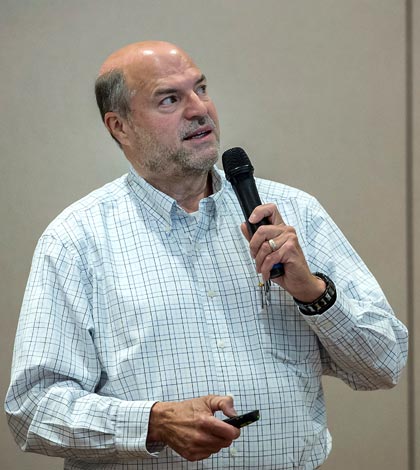 A regional effort 10 years in the making to strengthen river levees protecting the metro-east should achieve a major goal by next year, attendees of last Wednesday’s Columbia Chamber of Commerce lunch meeting were told.

Featured speaker Chuck Etwert, chief supervisor of Construction and Works for the Southwestern Illinois Flood Prevention District, said the 65-mile system of levees along the Illinois side of the Mississippi River has nearly reached its key goal of 100-year protection.

“Our target date to achieve FEMA accreditation of the three-county system is 2018,” Etwert affirmed.

The next effort will be 500-year protection.

Local work has focused on limiting underseepage in the Prairie du Pont and Fish Lake levee districts. Etwert noted that the work in Monroe County is being submitted to FEMA this month.

Etwert pointed out that the work did not include raising the levees.

“Not an inch,” he stressed.

He said the levees, built by the U.S. Army Corps of Engineers in the 1940s and 50s, were the correct height. The issue was, and remains, guaranteeing stability and strength to resist flooding.

Etwert reviewed the history of events leading to this project.

In 2007, the Corps of Engineers raised questions about the strength of the levees, which were then certified to provide so-called 500-year protection.

But questions emerged following flooding caused by Hurricane Katrina in New Orleans in August 2005 and subsequent studies of area levees.

The Federal Emergency Management Agency – the budget of which had been virtually eliminated by Katrina – moved swiftly to say it intended to de-accredit the 100-year protection level of the levees, and map protected land as now being in a flood zone.

Considering the levees had served well in the 1993 flood, 300-year level event, that seemed unimportant. But FEMA administers the National Flood Insurance Program, and flood insurance required for all federally insured loan properties would skyrocket up to 10 times.

Etwert said that would cost area citizens and businesses an estimated $50 million a year. This, in turn, would drive property values in the newly designated flood area down drastically.

By 2008, the three counties had entered into an intergovernmental agreement, joining to focus the estimated $11.5 million in annual receipts on the entire project and issuing bonds to get the work started and accelerated. Their new “face” in this crisis countered FEMA’s threat with a federal lawsuit.

In the meantime, Etwert said, the Corps of Engineers estimated this work would take until 2044 to complete.

By 2010, the flood protection group had brought the international firm of AMEC Foster Wheeler on board to manage the project. Each county was represented by three individuals, forming a board of directors, which Etwert praised as the “best he has ever worked with” in his long career.

FEMA also backed off when it saw the seriousness and commitment of the region, and said it would not re-map the region until at least 2019.

The 100-year protection level was determined to require some $117 million to achieve, Etwert said. As of today, only $3.2 million in contract work remains to be finished.

The levees were initially built high enough to provide 500-year protection. Their elevation is 52.5 feet — plus two feet of freeboard to halt wave action.

“We want to restore this ‘gold standard’ that has protected the bottoms for more than half a century,” Etwert said.

And with money left from tax receipts and bonds for the 100-year project, plus remaining bonding authority – if the Corps of Engineers comes through with its share on time – it is believed 500-year protection level could be reached by as early as 2024.

“We are working with the Corps to make final determinations of what’s required to reach the 500-year protection milestone,” Etwert said.

Turning to the nine-person board that has focused hundreds of hours of work on the project, Etwert said it should be viewed as a model for other similar intergovernmental efforts nationwide.

The project has been of special benefit to Monroe County levee districts — a total of $16.2 million has been spent for clay caps, seepage berms, piping, relief wells, sluice gates and one new pump station for the Fish Lake Levee District. That is balanced against just $4.3 million collected in taxes, to date.

Also during the meeting, Columbia City Engineer Chris Smith briefly updated ongoing work with FEMA in the re-mapping of city properties that may be affected by three creeks that drain the area. He noted that work remains to confirm creek elevation contours, and he is waiting to hear back from FEMA on questions posed to its regional office.

He said the issue in Columbia is not part of the Flood Prevention District’s project, because that is focused on Mississippi River flood management and not interior issues.

Those interested in following progress on the levees can visit www.floodpreventiondistrict.org.