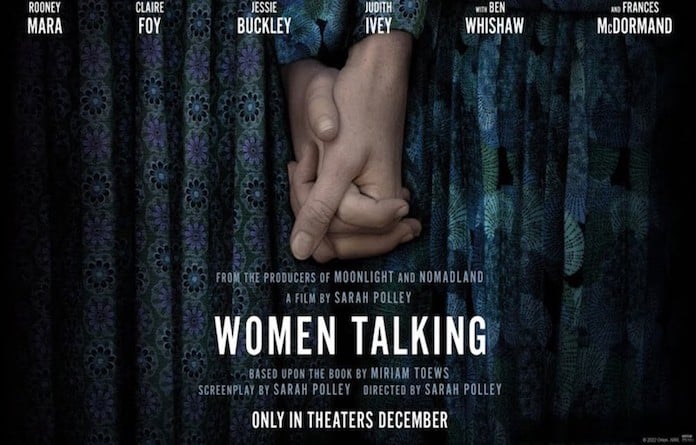 When audiences hear the title of Sarah Polley’s movie about Mennonite women gathering in a barn to “talk,” some may be led to believe such a movie will be deep and cerebral with long periods of silence and contemplation. Navel gazing. Some may even expect a dull, boring plot with too much to think about.

Indeed, Polley’s “Women Talking,” based on the 2018 novel by Miriam Toews, spends a lot of time in that barn with a group of conversing women. The topic of conversation, the dynamic of the group, the recounting of details and the eventual solution to a horrific problem, however, all make the movie anything but dull.

Toews, raised in a Mennonite community in Manitoba Colony, Bolivia, wrote a fictionalized version of the horrific rapes that plagued the ultra-religious group between 2005 and 2009. During this period, over 150 girls and women of the community were drugged and raped, ultimately resulting in a very public trial and prosecution of eight men, seven of whom were members of the colony.

Polley’s film adaptation brings the debate the women take on to the forefront of the plot. The women of the colony have finally broken their silence about what has been happening, and meet in the large barn of the colony to discuss what action should be taken; all this happening while the men of the group are in town attempting to raise bail for the accused.

Purposely kept illiterate (only the boys of the colonies attend school), the women engage in an election of sorts, using a stubby piece of lead and a simple “x” to vote for what they believe should be their course of action. The choice “stay and forgive” does not receive a favorable amount of votes from the women, and so the remainder of the movie is spent watching the women hash it out; deciding whether to leave or stay and fight.

As one may surmise from the movie trailer and posters, the amount of acting talent in this picture is phenomenal. Led by veteran actresses Judith Ivey and Sheila McCarthy as the wise, godly elders of the group, the film also stars Claire Foy (“The Crown”), Jessie Buckley (“Lost Daughter”), Rooney Mara (“The Girl With the Dragon Tattoo”) and Ben Whishaw (“Skyfall”).

With an ensemble such as this, it is difficult to single out performances. Each actor has an important contribution to make, and each one does an exemplary job. Ivey and McCarthy are beautiful and solid as the mothers Agata and Greta, yet exquisitely portray the crippling guilt of women who have raised their daughters in this environment.

Foy as Salome is wonderfully intense and heroic, almost on equal footing with Buckley’s Mariche – a sarcastic, eye-rolling domestic abuse victim. Mara is mesmerizing and dreamy as the unmarried, pregnant spinster Ona. Taking notes for the group is Whishaw’s heartbreakingly tender August, the only male allowed in and whose love for Ona gives him the courage to take a stand.

The movie is well done, but you have to pay attention to grasp the story as it unfolds. It is definitely not a feel-good film for the most part, but it’s an important film and one that will be buzzing in a few days when Oscar nominations are announced.

Go see it. Go to think, not necessarily to be entertained. My grade: A

“Women Talking” opens in theaters Jan. 20 and is rated PG-13 for the terrible subject matter the women discuss in addition to brief disturbing images. Running time is 1 hour, 44 minutes.