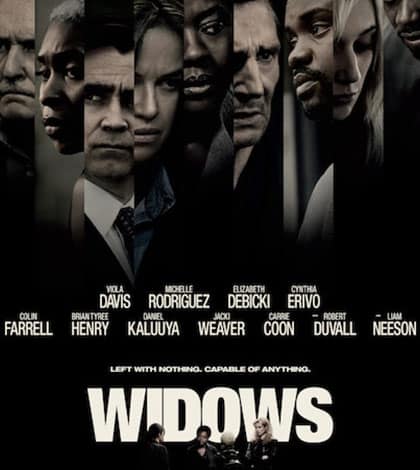 Steve McQueen has made challenging films about difficult subjects with his first three movies, which focused on a politically motivated hunger strike, sex addiction and slavery. After his last effort, “12 Years a Slave,” won best picture at the Oscars, McQueen probably could have made anything he wanted. No one expected him to want to make “Widows,” a heist thriller based on a 1983 BBC mini-series of the same name. Despite the unexpectedness of this project, McQueen has churned out another very good film.

Set in contemporary Chicago, “Widows” follows three women whose husbands, all professional criminals, were killed during their last job. Led by Veronica (Viola Davis), the widow of the criminal’s leader (Liam Neeson), the eponymous women must pull off a heist of their own to get even with the man their spouses stole from.

Perhaps due to the success of his last film, McQueen has attracted an A-list cast here. Davis leads the way with a strong and commanding performance. She balances the scenes where she must be an intimidating professional and those where she is a grieving widow quite well.

Elizabeth Debicki, as the widow Alice, is just as effective, skillfully portraying the arc her character goes through. The final widow is Michelle Rodriguez, who gives only a serviceable performance as Linda. She never does anything especially remarkable or terrible with her role.

Even with that strong cast, easily the best aspect of “Widows” is McQueen’s directing. He is working again with longtime cinematographer Sean Bobbitt, and the duo makes this a stylish and beautiful movie. It’s full of bravura shots, but two to watch out for are the arc shot that circles Kaluuya’s character during a confrontation scene and the long take from the hood of a car that shows the neighborhood change right before our eyes.

Another intriguing factor of “Widows” is the screenwriter, as McQueen collaborated with “Gone Girl” author Gillian Flynn for this script. It’s a fruitful collaboration in many ways.

McQueen and Flynn deserve credit for how smart they make this film. The heist scenes are certainly effective, but this is a genre picture with more on its mind than simple entertainment. These filmmakers explore themes like police brutality, the reality of being a part of the lower class, interracial marriage and more in brief, insightful and interesting ways.

A final highlight of this movie is the score from Hans Zimmer, which particularly shines in the heist scenes. It’s more outstanding work from, for my money, the best working film composer.

As much as I liked “Widows,” it did have significant issues from a screenwriting perspective. Paramount among these is that the film’s plot is easily predictable, both on a macro and micro level. From a big picture standpoint, it’s pretty easy to see where some of these characters’ arcs are going and how some of the twists in the plot will unravel long before they transpire.

On a micro level, the beats of several scenes feel too familiar. The female empowerment moments, specifically, seem almost forced or obligatory because they are so obviously telegraphed. That makes them feel somewhat false and less impactful, although I’m sure they are neither of those things in the minds of McQueen and Flynn.

The other substantial problem with McQueen’s film is this ensemble seems a bit overstuffed because not all of the character’ arcs end satisfyingly. Viewers never get closure with some of the side characters, like Jack Mulligan or Manning, just audio that attempts to wrap up their stories. They feel a tad forgotten, which is a shame because, if anything, those characters deserved even more screen time.

Given the sum of those parts, “Widows” is still a really good movie. It has a strong cast, brilliant director, good but flawed screenplay and effective score. It has its issues, but it is still one of the most entertaining movies of 2018. I give it three and a half out of five stars.