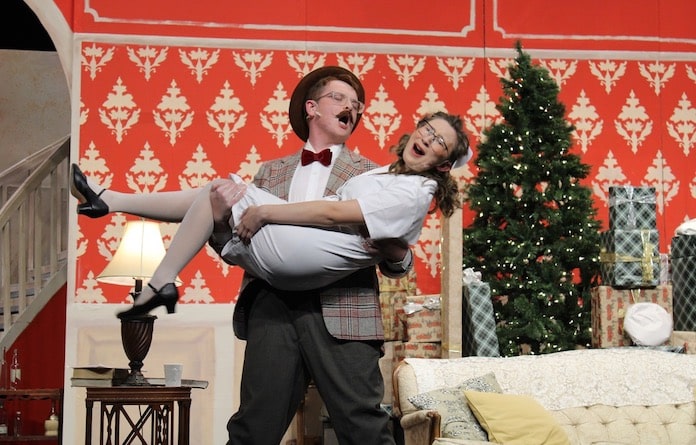 I stepped out of my usual world of entertainment and into a new one. To clarify, I am not a man of the arts but for a change of pace, I attended a fall play presented by my high school.

I attended Columbia High School’s performance of The Man Who Came to Dinner as a critique for the people – not for the performance arts industry. For those unfamiliar, the play portrays the events of Sheridon Whiteside’s stay at the Stanley Residence. Mr. Whiteside, a fiery and stubborn man, finds himself injured while on tour for a radio show during Christmas Season. Sheridon, or Sherry, proceeds to fall on ice and injure his hip upon his arrival at the Stanley household. This injury limits him to a wheelchair, preventing him to continue his tour. In order to subdue Mr. Whiteside’s urges to sue the family, they invite him to stay in their home until he recovers. What the Stanley family will come to learn is Mr. Whiteside is – shall we say insufferable – to be around. Throughout the play, both the Stanleys and Maggie Cutler, Whiteside’s secretary, must handle and tread the interactions and behaviors of Sherry Whiteside and the guests he invites.

When attending a play, you expect to walk away with some vibrant emotion that the actors and crew try to bestow upon you. It would be an understatement to say this show was funny; to be clear, it was hysterical. No doubt it was a masterful comedy presented by a very talented high school group. Through all three acts, there was pure laughter from the audience. Most intriguingly, each act had its own unique kind of comedy. The first two acts displayed a fascinating set-up of plot and character introduction with such a subtle comedy. Between the feisty dialogue and subtly harsh and edgy jokes, the entire first half of the play built a fantastic and entertaining set-up for the wild third act. At the end of the second act, the scene closes quite chaotically, alluding to the chaos of the plot-twisted ending to come.

It is impossible to pay credit to each actor but in reality, each one deserves a standing ovation for their performance. Most notably, Noah Boyer Edwards played an outstanding Mr. Whiteside. Noah made this performance look like a breeze. He brought the flamboyant and ruthless character of Sheridan Whiteside to life. Every insult, every quip, every long-winded command or conversation Whiteside is prone to say was delivered perfectly. Noah’s execution of Mr. Whiteside’s feelings toward each character establishes the type of relationship Whiteside has with each individual character in the play. Boyer-Edwards puts the icing on the cake with his performance by slowly but noticeably developing the changes in Whiteside’s character.

Annelyse Birner, who played Whiteside’s secretary Maggie Cutler, was one of my favorite characters. I imagine that playing an assertive secretary would be very difficult, but Birner knocked it out of the park. She displayed the perfect picture of a young and ambitious woman who falls deeply in love. My favorite part about this character goes deeper than the lines she says. Through each evolving emotion, Annelyse’s expressions seem most fitting for exactly what Maggie Cutler was going through. That is a work of art right there. While Ms. Cutler’s lines may not have had the most dramatic effect, Lorraine Sheldon’s lines did. Maggie Brockland executed the most believable Lorraine Sheldon, the antagonist and foil to Maggie Cutler, you could imagine. Both Maggie and Annelyse sparkled in their own rights, highlighting the juxtaposition between their characters and expounding on the conflict between the two.

I feel a highly underrated set of characters is the Stanley family. After all, the story takes place in their house but each of the Stanleys has a limited amount of stage time. Henry Bass as Mr. Stanley, Amanda Chace as Mrs. Stanley, Lux Woodrome as June Stanley, Sean Woodcock as Richard Stanley, and Amy Veinosky as Harriet Stanley are all given precise moments to capture their character and each hit the nail on the head. The Stanleys are not the only set of characters who optimize their stage time. Dr. Bradley and Miss Preen, played by Riley Klevorn and Lilli Eames, are two others who performed well in short appearances. Not to mention, the reporter Bert Jefferson played by Brody Curtis meshes into the show as a fun and relatable character during his stage time. Among other important characters included Beverly Carlton and Banjo. Both are friends of Mr. Whiteside and become guests at the Stanley Residence. What I find so creative about these characters is they are talked about in such a caricature that the audience is anticipating their arrival to the stage. Oh, and do they each deliver. Both Noah Parker as Beverly and Bradley Barnard as Banjo knock the socks off each member of the audience. They are both richly physical comedians, with expert timing and connectedness both to their fellow actors and the audience.

Also a huge shout out to the stage and costume crew who ultimately immersed the audience into this little world. And of course, hats off to director MaryBeth Babcock, who cultivated a masterpiece this fall.

If mistakes were made or equipment was not exactly as it should have been, then it was very unnoticeable. I practically laughed through the whole show and felt relatable to almost every character. The audience seemed engaged and everyone I spoke with on the way out seemed to have gotten their money’s worth. A few days before I saw the live performance, I was assigned to take pictures during tech week for the school’s yearbook. The entire cast and crew were very photogenic and lively. It came as a surprise to me how many “hellos” and friendly smiles I received during set-up and after the show. There were moments when I had to stop taking pictures just to either laugh or take in the moment. It was very impressive. A huge thank you to the actors and director for allowing me to intrude and have a great couple of nights.