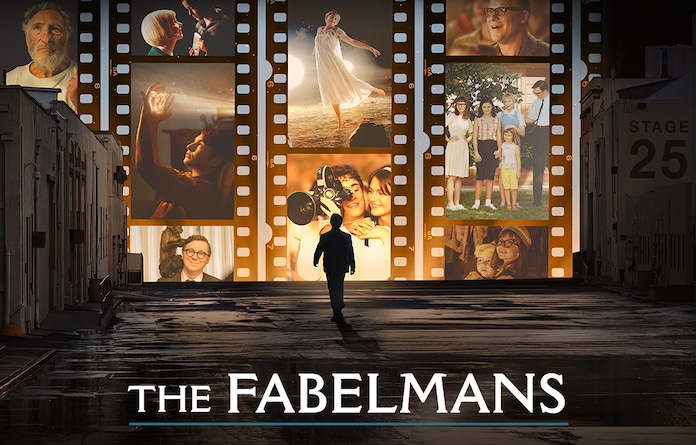 Any fan of Steven Spielberg will agree that no movie genre can serve as a storehouse for his films.  Indeed, his most well-known blockbusters run the gamut of themes, topics, emotions and what have you. His latest film, “The Fablemans,” is at times a study in family dynamics, a tale of growing up and discovery, a story about the trappings of domestic life and a semi-autobiographical memoir on how Spielberg became enamored with movie-making.  In the end, audiences will clearly see that it is Spielberg’s love letter to his family and his past.

The film begins with young Sammy Fableman (Spielberg’s mini-me, Mateo Zoryon Francis-DeFord) being taken to see DeMille’s 1952 blockbuster “The Greatest Show on Earth” by his parents Mitzi and Bert (Michelle Williams and Paul Dano), who are interested in exposing their children to the joys of life. Young Sammy is mesmerized by the film, playing the famous train crash scene over and over in his head.  This leads the boy to film his own short, 8 mm films using his train set and other toys.  After this, he continues to graduate to bigger and better equipment, and as an adolescent (now Garbriel LaBelle), stages and films bigger productions  to show at Eagle Scout functions.  Along the way, young Sam explores special effects and ways to make his movies better.

Even though Bert and Mitzi are indulgent and supportive, both of them react to Sammy’s movie-making in different ways. Bert, a hard working engineer charged with taking care of his family, falls into the more practical attitudes of a 1950s father, encouraging Sammy but also calling his interest a “hobby.” Mitzi, a concert pianist, recognizes a kindred spirit in her son and is visibly moved and ecstatic when he begins turning out “art”.  The parents’ reactions to their son are also the first inklings that all is not well in 1950s suburbia.

As the family moves from New Jersey to Arizona to California, following Bert’s upwardly mobile career, we watch Mitzi desperately trying to hang on to who she is and trying to do what is right for her family. Her devotion to her children and a husband that she loves is only a facet of her being.  She is one of those complex people who seems to be able to love many people and many aspects of life  equally and fiercely; yet there is always an angst, a well hidden unhappiness, and a feeling that she is a free spirit trapped in a world of dutiful 1950s housewives.

Throughout the movie, we are inundated with nostalgia and wonderful sequences with glimpses into the world of the 1950s and early 1960s.  Indeed, at times, it is almost as if we are looking through the rose colored glasses that many people  seem to look through as we remember our childhoods. Yet, Spielberg also takes the glasses off, at times, and gives us an intimate and true portrait of an imploding marriage and the discovery that life can be edgy and awful.

Williams, sporting a glamorous Peter Pan hairdo, has the acting chops to play such a complex character. As with many of her roles, Williams can be so intensely coruscating in her performance. Her forlorn side glances, the short moments of pain that flash across her face (even in moments of joy) and a face that is radiant, yet equally  translucent and transparent at the same time are the elements that make this performance powerhouse.

Paul Dano as Burt gives a performance that is heartbreakingly phlegmatic. We can easily see how Burt wants so desperately to love his wife the way she needs to be loved, yet is at the same time so driven to take care of things and continue to advance in his career.

Downplaying his usual silly persona, Seth Rogen gives a solid performance as family friend Bennie. One of his scenes is particularly deep, meaningful and poignant, and we are reminded how comedians are often expert at drama, even in short spurts and glimpses.

The likable LaBelle as the adolescent Sammy (excuse me, Sam), gives a nuanced performance and has clearly gotten superb tutelage and direction in this role. Like Williams, his expressions and the myriad of emotion he can show without speaking a word are notable.

Judd Hirsch as the family black sheep, Uncle Boris, chews the scenery as he romps around telling young Sammy how devastating life can be when one is in love with “the arts”.  Uncle Boris, a former circus, vaudeville and silent movie actor has sacrificed his life for his devotion and love for “art”.  Hirsch will be up for a Supporting Actor nomination for this appearance, and will probably win.

There is another magical, wonderful scene in the movie that is worthy of note, but I don’t want to give any of it away.  Just sayin’.

How challenging it is to tell one’s own story, even with added Hollywood embellishments and story glossing. Because Spielberg has given us such a plethora of cinematic greatness, we can certainly look past the 2.5-hour timeframe, and some of the heavy sentimentality. This film has such wordless, lyrical moments that are, at times, heart wrenching. I found the movie incredibly funny in spots, adventurous and wonderfully exuberant.   It should be noted that Spielberg’s brilliance makes room for a lot of story in this movie, packing in parallel plots in an ingenious way.  It is clear to the audience that one of Spielberg’s attractions to movie making was the element of control and being able to change and manipulate life, maybe just like the young Sammy would have liked to.

This is a movie you will want to see at theaters, and it’s easily one of the year’s best. It’s evident that it has been released just in time for Oscar buzz, and it will certainly get its fair share.

“The Fablemans” opens in theaters on Wednesday, Nov. 23 and is rated PG-13. Running time is 2 hours and 31 minutes.