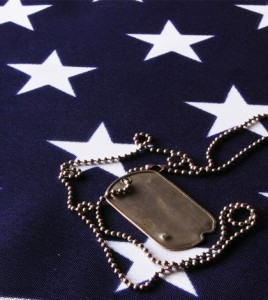 Yesterday, after reading a Facebook post from our talented Republic-Times photographer, Alan Dooley, I was thrilled to learn of recent law that was passed regarding former service members being allowed to salute the flag in civilian clothes during the National Anthem.

Alan, a retired Naval officer who I have much respect for, posted this information in hopes of spreading the word to men and women who have served our country, including myself, who may not have been aware of it.

“We are today nearing Veterans Day 2014. Few Americans are aware that acts of Congress in recent years have authorized military members in civilian clothes, AND veterans, to render proper military hand salutes, vice placing their hands over their hearts, as our flag passes, is raised or lowered, or presented. The hand over the heart is good, but we have EARNED this added privilege. This was done in the Defense Authorization Act of 2008. This was amended in the Defense Authorization Act of 2009, to include during the playing of our country’s National Anthem. I urge all of you who have honorably worn our uniform to start doing this. Explain it to those alongside you. Please continue to honor our flag as you did in your service to our nation.”

Thank you, Alan, for bringing attention to this important matter. You see, prior to 2008, only active duty personnel in uniform and other select groups could salute the flag during a raising, lowering or passing of the flag. Sure, many veterans did it anyway – why wouldn’t they? After I was honorably discharged, I saluted my fair share of flags at ballgames and other events, but it’s just nice to know that someone in Congress took the time to make it real. I think a majority of service members and veterans can relate when I say that it felt very strange not to fire off a rigid salute when you saw Old Glory flying.

The first provision to allow veterans and out-of-uniform service members to salute during the circumstances above was part of the National Defense Authorization Act of 2008. The second provision, the one that authorized the same action during the playing of the National Anthem in 2009, was sponsored by Sen. Jim Inhofe of Oklahoma, an Army veteran himself.

So, if you’re ever at a ballgame or event where the National Anthem is playing, and you happen to see the man or woman next to you, in regular clothes, eyes-forward and saluting the entire time, chances are pretty good that they’ve served their country with honor. Take a few seconds, shake their hand and thank them for their service.

I promise they’ll appreciate it