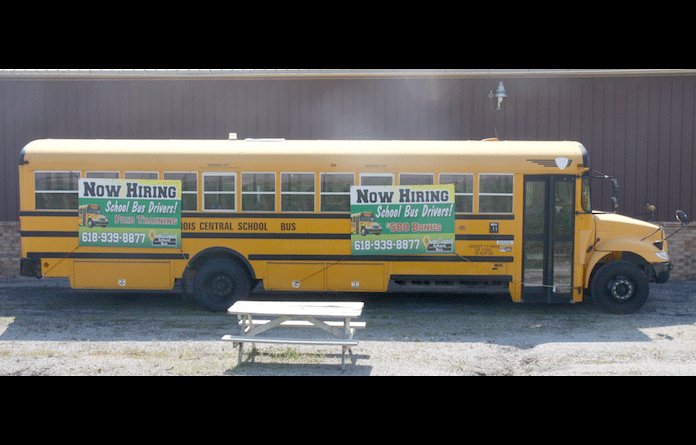 With select federal unemployment aid expiring, many employers saw this as a potential light at the end of the tunnel, reasoning it could increase applicants they so desperately need.

But there is a lot more that plays into the cross-industry labor shortage, many Monroe County businesses are finding.

Illinois Central School Bus in Waterloo’s company contract manager Cynthia French was told to increase recruitment efforts in response to these benefits running out, but has found “interest has dried up.”

Jeff Vogt, owner of JV’s Downtown Bar & Grill in Waterloo, said he has not had much luck bringing in young workers the restaurant needs, despite reaching out to the high schools.

Even Columbia Mayor Bob Hill placed some hope that these changes in unemployment benefits would bring in seasonal laborers for the city’s Department of Public Works.

“The stimulus unemployment money ended (Sept. 6), so we’ll see if that gives (the city) some job applicants,” Hill said at the Sept. 7 city council meeting.

Based on data from states that ended such benefits earlier than Illinois, there’s a chance the worker shortage crisis will continue well after aid ends.

“In the states that ended their programs early, they haven’t seen the comeback of workers that they expected, and I really don’t think Illinois is going to see it either, at least not right away,” said Alicia Plemmons, assistant professor of economics at Southern Illinois University Edwardsville.

Plemmons said there are two main reasons explaining this phenomenon: many are not returning to the labor market and upper-middle class jobs are seeing high rates of job switching.

One’s decision to not return to the workforce is largely based on personal circumstance. For families who bolstered a nest egg during the pandemic, the uncertainty of children being taken out of school as close contacts, or from actually contracting COVID-19, sending both guardians back to work may not be the best choice, Plemmons noted.

“There’s so much uncertainty with school or if a child gets sick,” Plemmons said. “They might have to be out for seven to 10 days, (and) that flexibility just does not exist (in jobs) at this point. In the pandemic, a lot of households ended up saving a ton of money, (so) many of them have decided to be one-income households for a short period of time until things sort of get safer down the road.”

Plemmons said younger individuals who did not save during the pandemic may have changed their lifestyle in other ways to avoid returning to work.

“We also see people who have decided to leave their jobs (not) because they did have some availability of savings, but because they were able to re-adjust their lives,” Plemmons said, later explaining, “There are still people who say (that) right now it’s still kind of unsafe for low-income, customer-facing jobs and it may not be worth the risk. Instead, I can live with my parents or with my friends, or we can have one person have a really good job and I maybe not work as great of a job.”

This is common among specific industries, Plemmons added.

“That’s a lot of what we’re seeing happen with some of these harder to fill customer-facing jobs such as gyms, restaurants or retail, and those are the ones that the real crisis is happening in,” Plemmons said.

In the restaurant business, employers typically target young adults, such as high school kids, during recruitment efforts. They promise opportunities for advancement, yet many kids still aren’t taking the bait.

Plemmons said this may be because there are other opportunities for these kids to make money with less risk of being exposed to COVID-19.

“They could do gig working where they also live kind of paycheck-to-paycheck for a similar income, but they’re instead delivering things to people’s doors and they’re no longer having to have this constant in-person interaction with people,” Plemmons said. “So I think there might be a preference for a different type of job and I think we might see a lot of people in this 16-24-year-old age category either electing not to work or instead working in things that have less of a customer-facing approach.”

Adding insult to injury, the nation is now grappling with the more-transmissible Delta variant.

“I think a lot of that is because of the uncertainty with Delta,” Plemmons said as to why people are not returning to work, especially with customer-facing jobs. “Family members, friends and community members are getting sick, and that makes people feel very scared, especially when they don’t have any sort of pay protection or if they get sick (they don’t know) who is going to take care of their kids or who is going to take care of their family or their responsibilities.”

However, the employment landscape is not all negative.

“People are switching to new jobs that better match their skills, (and) that is a sign that typically the economy is doing well,” Plemmons said.

According to Plemmons, this trend is seen both within industry and across fields that consist of upper-middle class workers. When people seek other, higher-level opportunities, they leave open positions behind.

As many employers are actively seeking new employees and promising higher wages, benefits or other incentives, many are inspired to act on new opportunities.

“People are more willing to kind of switch jobs right now, not only because they have built up some savings, but because they say ‘Now there are much better wages in my industry’ or ‘Because so many jobs are available, I can switch to a job that better matches my skill set,’” Plemmons said.

Kris Fulford, executive director of the Monroe County YMCA, said they have seen multiple individuals moving up the job ladder and therefore have some full-time positions open. This is nothing compared with the ebbs and flows they have seen with part-time position openings.

Fulford said there may be a correlation between timing of federal unemployment benefits running out and interest in positions.

“It’s hard to say with absolute certainty that one impacted the other because each individual’s situation is unique, however, (interest) does coincide with the timing (of government support beginning or expiring),” Fulford noted.

In hopes of helping businesses weather the storm of employee shortages, Plemmons made some suggestions.

“Things to consider might be implementing strategies that would make people feel more comfortable working there, so thinking about how they could have a safe and welcoming environment so people are less likely to say ‘I don’t need that (job),’” Plemmons said. “This could include incentivizing with higher pay or more benefits, which I know is difficult for some businesses to do.”

“(They could also) consider more cleaning protocols or giving people more flexibility. For example, the security of if you do come here but your child at home gets sick, we can guarantee that you can have 10 days off for you to take care of your child. Giving them some sort of flexibility that would alleviate some of their worries would probably be an immense help to convince some people to come back to work,” Plemmons said.

Those interested in working for the businesses mentioned in this article are encouraged to apply.