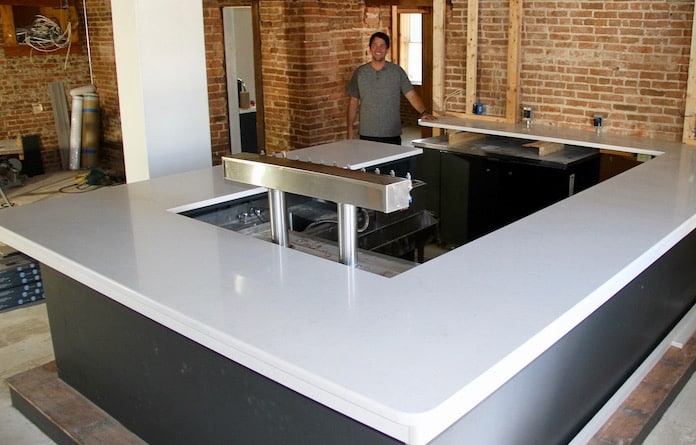 With exposed brick and ceiling beams as well as construction equipment scattered around, Happy Hour is still a work in progress, but it’s coming together.

Renovations for the space started Aug. 3, and while the cousins are currently unable to promise a specific opening date, the Buettners did say they are putting the space together as fast as they can.

“We are progressing,” Matt said. “Things are coming along pretty well. No set open date or anything like that, but we’re making progress and we’re pretty excited.”

The Buettners spoke about their plans for the bar, including what seems to be something of a burning question in the community: what will be the establishment’s dining options?

“It’ll be a condensed menu,” Kyle said. “I would like to think one step above bar food where we have good quality food, but there’s not gonna be a lot of options. You’re gonna have to come in and order off the smaller menu. Hopefully it’ll be quick turnaround and good quality.”

Kyle explained he and Matt are very much trying to differentiate the business from JV’s rather than just trying to be an imitation of it. This especially includes Jeff and Denise Vogt’s cooking, of which he spoke highly.

Kyle said their hopes to make the space their own also extend to their insistence on changing the bar’s name and plans to emphasize the “sport” in sports bar.

He said while many of the bars in downtown Waterloo have TVs, Happy Hour is specifically intended to showcase sporting events.

Kyle said the bar is intended to serve as a gathering place for football and even early Saturday soccer fans, but their “bread and butter” will be St. Louis sports mainstays in Blues hockey and Cardinals baseball.

“We wanted to come in with a fresh vibe and a new look, and we came up with the idea of a sports bar,” Kyle said. “The idea behind the sports bar is obviously still very family friendly. We’re going to keep that up, bring your kids and everybody in here.”

Kyle added that they want to make good use of the rustic building in which the bar is housed. He specifically noted the exposed ceiling and beams and how that style is especially popular right now, saying they have a “cool, old building” that they want people to be able to see.

The Buettners also explained the reason why they decided to start up a business in downtown Waterloo in the first place, commenting they feel Waterloo takes care of its businesses very well.

They also voiced their respect for the Vogts and what they were able to accomplish with JV’s.

“They had just run such a successful business and had done such a good job for so long that we knew the clientele is here in Waterloo,” Kyle said. “Waterloo just does an amazing job of supporting its own businesses, and that’s just something that we wanted to be a part of.”