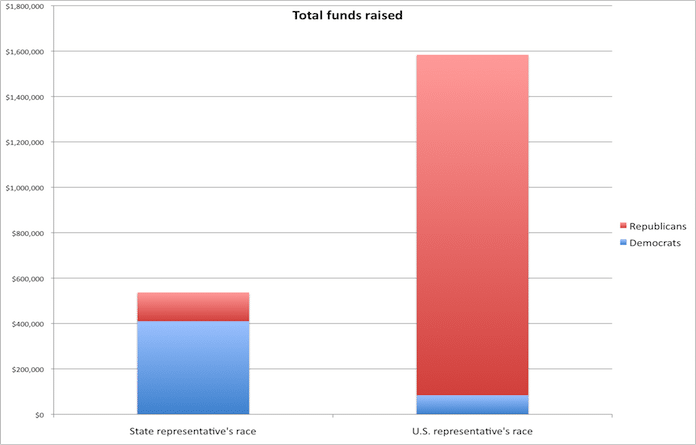 As Nov. 3 draws nearer, a look at the campaign finances of the contestants in the main Monroe County races offers insights into who supports each candidate and how much they have invested in the 2020 election.

Using data from the Reform for Illinois’ Sunshine Database, Illinois State Board of Election and Federal Election Commission, the Republic-Times found nothing untoward in the donations and expenditures of the campaigns of George Green, Duane Langhorst, Lucas Liefer, Celeste Korando, David Friess, Nathan Reitz, the committees for and against the graduated income tax amendment, Mike Bost or Raymond Lenzi.

As may be expected, the county government races have the least amount of money involved.

By far the largest contributor to Green’s campaign to be the newest county commissioner was the Monroe County Republican Central Committee, which has given $5,500 to help its candidate this year.

Other donors to Green’s efforts are John Glessner and Monroe County Sheriff Neal Rohlfing, who each gave $500, Monroe County State’s Attorney Chris Hitzemann, who donated $180, and George Obernagel, who chipped in $160.

Green’s two biggest expenditures have been for yard signs and newspaper advertising.

Green has also used $1,500 to purchase a website and social media ads from Marketicity and $242.24 to buy campaign T-shirts from Gillan Graphics. Additionally, he has spent almost $1,000 to sponsor or advertise at various charitable events.

Langhorst, Green’s opponent, does not have the same backing.

The Monroe County Democrat Central Committee has contributed $3,000 to his campaign, but records do not indicate Langhorst has spent any of it.

The Democrats have also invested over $2,400 in robo calls and mailing, which could have helped Langhorst.

The story is similar in the race for Monroe County State’s Attorney, with Republicans outraising and outspending Democrats here.

The local GOP also donated $5,500 to Lucas Liefer in his bid to become the next state’s attorney.

Liefer’s opponent, Korando, has also gotten $3,000 from the Monroe County Democrats, but records do not show she has spent any of that money.

Some of the funds the county’s party used for robo calls or mailing could have gone toward Korando’s candidacy.

At the state and federal level, the number and amount of donations increase dramatically.

In the race to represent the 116th district in the Illinois House of Representatives, Republican challenger David Friess has seen his fundraising dwarfed by incumbent Nathan Reitz (D-Steelville), but he has still outspent his opponent in 2020.

Friess has received over $127,000 in donations this year, with the biggest donors being at the state level.

The Illinois Republican Party has given over $67,000 to help get Friess elected, while the House Republican Organization has contributed over $33,000. Similarly, a conservative group called the Illinois Opportunity Project has given $6,250 to the Friess campaign.

Friess has also received numerous donations from individuals, ranging from $1,200 to $500. Notable contributors include Obernagel, who gave $1,250, and Regional Superintendent of Schools Kelton Davis, who gave $500.

A few special interest groups have also donated to Friess. The National Federation of Independent Businesses Illinois has contributed $1,000 and Knight Hawk Coal matched that amount.

Friess has used these funds to promote his campaign in several ways, including spending $4,519.50 for brochures from Modern Mailing, $2,010.94 for yard signs from Total Eclipse, $1,986.06 for signs from DE Signs and over $900 for advertising in newspapers, including $392.80 in the Republic-Times.

For his part, Reitz has received almost $410,000 this year. Like Freiss, his biggest donors are state-level organizations aligned with his party.

The Democratic Party of Illinois has contributed $121,828.97 to his re-election bid, and a group called Democratic Majority has chipped in $4,924.49.

Reitz has far fewer small, individual donors, but as a sitting state representative he has received much more from special interest groups.

Reitz has gotten $10,000 or more from funds or committees associated with the Associated Beer Distributors of Illinois, Illinois Laborers, Illinois Federation of Teachers, Chicago Regional Council of Craftsman and Illinois Education Association.

He has also received contributions from $250 to $5,500 from a number of businesses and special interest groups including Bayer, several blue-collar unions like the United Mine Workers of America, AT&T, Vistra Energy, John Deere, Comcast, Knight Hawk Coal, Union Pacific. Ameren and Illinois American Water Company.

Despite that fundraising success, Reitz has spent fairly little so far this year, according to the most recent data. He has used just $33,093 of that money, with $14,400 paying for a fundraiser held with the St. Louis Blues early in the year.

Other large expenditures include $3,244.87 to Levy Restaurants at the Enterprise Center for that same fundraiser, $5,947.02 to Sign Solutions and Promotions for campaign material, coolie cups and signs, $2,716.18 for mileage, $1,411 to Doug McGoldrick photography for pictures, $1,039.28 to Lenovo for a computer and accessories and $1,900 to the St. Clair County Democratic Central Committee for primary expenses.

Also at the state level, the two groups advocating for and against the graduated income tax amendment have spent around $100 million in their efforts to persuade voters.

The Vote Yes for Fairness committee, which supports the amendment, has only three donors. It received $56.5 million from Gov. JB Pritzker, a billionaire, and a total of a little over $1,700 from two Chicago-based companies.

The Coalition To Stop The Proposed Tax Hike Amendment, which is against the change, has more donors but is also largely funded by a wealthy Illinoisan.

Kenneth Griffin, CEO of the investment firm Citadel who is worth around $15 billion, has contributed $46.75 million to the group.

Both committees have spent millions at various advertising, public relations and consulting firms to spread their respective message.

Bost has received over $1.5 million in donations, with more than $1.37 coming from individuals or special interest groups and the rest coming from other political committees.

Bost has spent $576,795.47, all but a few thousand of which went toward what the FEC considers operating expenses.

Conversely, Lenzi has raised less total than Bost got from his biggest donor.

Lenzi has gotten just over $83,800 with only about $9,000 coming from other political committees.